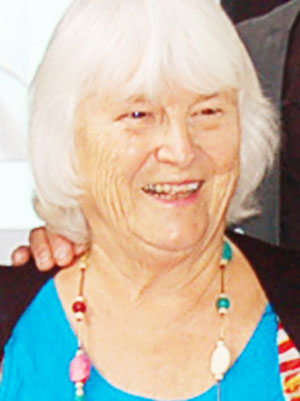 
With her husband Robin Riddington, producer and radio documentary producer Jillian Ridington has worked for decades with the Athapaskan-speaking Dane-zaa people of the Peace River region, also known as the Beaver Indians. She is a long-time resident of Galiano Island.

Review of the author's work by BC studies:
Where Happiness Dwells: A History of the Dane-zaa First Nations

People of the Trail: How the Northern Forest Indians Lived (Douglas & McIntyre, 1978) with Robin Ridington.

People of the Longhouse: How the Iroquoian Tribes Lived (Douglas & McIntyre, 1982)with Robin Ridington.

When You Sing It Now, Just Like New: First Nations Poetics, Voices and Representations (University of Nebraska Press, 2005) with Robin Ridington.

When You Sing It Now, Just Like New (University of Nebraska Press, 2006) with Robin Ridington.

Articles: 1 Article for this author
Where Happiness Dwells: A History of the Dane-zaa First Nations
Review (2013)

Eventually someone will have the temerity to write a book about the white people who have heroically assisted the First Nations of B.C. to recover their cultures, languages and land.

Starting with Scotsman James Teit, who met Franz Boas in 1894, this politically incorrect "white heroes"; list would certainly include early knowledge gatherers such as Charles Hill-Tout, followed by anthropologist Wilson Duff, who committed suicide after testifying in the Calder Case (1973) on Aboriginal title claims in northwestern B.C., lawyer Tom Berger, who argued it and ultimately paved the way for the Nisga'a Accord, and under-recognized linguists such as Jay Powell, Ronald Beaumont and John Enrico. And Robin and Jillian Ridington.

Robin Ridington first visited the Fort St. John Band (now called Dane-zaa) in the Peace River region in 1959. He returned in 1965-66 and for shorter visits in the late 1960s with his first wife, Antonia (now Antonia Mills), and their son, Eric, who was called Aballi by the Dane-zaa. Their daughter, Amber, was born in Dane-zaa territory in 1969.
After Ridington remarried in 1976, he revisited the area with his second wife Jillian in 1978, the same year he released his first book on the Dane-zaa, Swan People: A Study of the Dunne-za Prophet Dance. After fifty years of anthropological study and friendship, the Ridington's have produced a collaborative history of the Dane-zaa First Nations, Where Happiness Dwells: A History of the Dane-zaa First Nations, one of the most significant and in-depth works of B.C. ethnology.

"We wrote this book so future generations of Dane-zaa can know and understand their heritage,"; says Jillian Ridington, "and so interested lay readers and other First Nations can have access to Dane-zaa knowledge.";

In Dane-zaa Záágé or Beaver, an Athapaskan language, the term Dane-zaa simply means "real people."; Their elders maintain heaven is like Su Na chii k'chige, meaning the summer gathering place where people from different bands met to sing and dance and renew their relationships. The term Su Na chii k'chige translates as "the place where happiness dwells."; Hence former chief Gerry Attachie suggested to the Ridingtons that Where Happiness Dwells would be a suitable title.

Dane-zaa families have lived where the Peace River flows, through what is now northeastern B.C. and northwestern Alberta, for millennia. The first contact with Europeans was made just over two centuries ago, when Peter Pond established Fort Vermilion in 1788 and when Mackenzie passed through their land in 1793. A year later, fur traders arrived, establishing the earliest fur trade post in British Columbia, at Rocky Mountain Fort (not far from the present site of Fort St. John).
Fur traders first recorded Dane-zaa names in a North West Company post journal in 1799. Catholic priests arrived in 1859 but didn't live with the people. According to the foreword to Where Happiness Dwells, "Many Dane-zaa, especially the women, had little contact with the fur traders and rarely encountered white people until the building of the Alaska Highway in 1942.

"The fathers and mothers of contemporary Doig elders spoke little or no English, had no driver's licences and lived most of their lives without a telephone, electricity, or indoor plumbing. No Dane-zaa children attended school until 1950.";

Where Happinesss Dwells focuses on the people who were known as the Fort St. John Beaver Band until they divided into the Doig River and Blueberry River First Nations in 1977. Former chief Tommy Attachie told the Ridingtons that white people named the Doig River for a Scottish trapper named Fred Doig.

A large part of the book takes the form of stories told by Dane-zaa elders and recorded on tape, minidisc, and video. "We recorded most of the stories in this book in Dane-zaa Záágé,"; says Jillian Ridington. "In the 1960s, Robin used two tape recorders. He played the original story as told in Beaver on one recorder and recorded the translation on the other. We now use a computer to play digital audio files and transcribe the
translations directly into a word-processing program.";

Many Dane-zaa now embrace evangelical Christianity, yet knowledge through dreaming continues to be an important way of making contact with the spirits of animals and human ancestors. Robin Ridington recorded the band's last Dreamer, Charlie Yahey, telling the Dane-zaa creation story in August of 1965 when he visited the Halfway River Reserve with people from Prophet River. Charlie Yahey says on one of the recordings, "I am talking to this white man and his tape recorder, but through this the world will listen to my voice.";

The couple acknowledge the importance of the Doig River Dictionary by Marshall Holdstock and Jean Holdstock, along with linguists Patrick Moore and Julia Miller, for providing a proper orthography of Dane-zaa words. Credit is clearly accorded to their most vital collaborators, particularly Billy Attachie, who obtained training in linguistic transcription during his work with Marshall and Jean Holdstock.