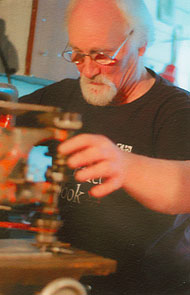 
"My fated collision with printing has been quite plainly one of the greatest blessings in a charmed life." -- Jim Rimmer

Variously described as "the master of all things letterpress," and "one of Canada's most remarkable typographic figures,"; Jim Rimmer was an inspirational figure within the Alcuin Society dedicated to the appreciation of rare books and letterpress printing.

Jim Rimmer started working as an apprentice typesetter at his grandfather's Vancouver print shop, J W Boyd Printers & Publishers, in the 1950s, earning $15 per week, becoming type director at the Lanston Monotype Corporation in the 1970s. As a creator of was revered by the West Coast letterpress community.

Organized by Eric Swanick of SFU's Special Collections, "Rimmerfest" at Simon Fraser University's downtown campus in November of 2006 was a celebration of Rimmer's achievements as a typographer, illustrator, designer, printer, publisher and mentor. The gathering also marked the publication of Rimmer's third title from his New Westminster-based Pie Tree Press & Type Foundry imprint, Leaves from the Pie Tree. Rimmer's press was named after "an ancient snagly old tree in our backyard, from which a couple of lovely old sister ladies who used to live next door to us would bake apple pies. They always referred to it as the Pie Tree."; Speakers at Rimmerfest included author Robert Bringhurst, printer Dick Kouwenhoven, illustrator Charles van Sandwyk and designer Denise Carson Wilde. Crispin Elsted of Barbarian Press presented Rimmer with 19 broadsides in his honour, including Elsted's query, WHAT IS THERE ABOUT PRINTING WHICH MAKES SUCH AMIABLE FANATICS OF US ALL? Another broadside from Peter Haas and Mona Fertig described Rimmer as "a jazz musician with inky fingers." The broadsides, Rimmer's private papers and his Pie Tree Press collection were donated to SFU Special Collections on the seventh floor of the Bennett Library.

Articles: 1 Article for this author
Memories from the Composing Room Floor
Press Release (2008)

Beginning with his less than shining early academic career, Rimmer recounts his first experiences setting type at Vancouver Technical High School and leaving school after grade ten for a six-year apprenticeship in the composing room at J.W. Boyd's in the 1950s. With stories about the colourful characters who inhabit the printing trade and his alternately calamitous and successful attempts at refurbishing printing and typecasting machinery, Rimmer revels in the influences and misadventures that have shaped his life.

Pie Tree Press contains reproductions of Rimmer's illustrations and presswork, as well as samples of his original metal and digital type designs. The book also includes photographs and detailed descriptions of Rimmer's unique typecutting processes and a new chapter on his experiences with Giampa Textware creating digital fonts in the 1980s and 90s.

Jim Rimmer is a designer, illustrator, typographer and type designer. Rimmer was born and raised in Vancouver, BC, and worked for many years as a commercial designer. He was type director at Lanston Monotype during the 1970s when it was based in Vancouver. At his Rimmer Type Foundry in New Westminster, BC, he has created 190 digital and seven metal typefaces.