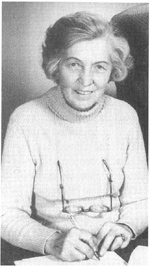 
Gwen Ringwood is cited in the Encyclopedia of British Columbia as having the first book of collected plays published by a Canadian playwright.

Born on August 13th, 1910 in Washington state, Gwen Ringwood arrived in Canada in 1931 to study at the University of Alberta. She began her career as a playwright at the Banff School of Fine Arts in 1935 and later worked as a teacher in Alberta. In 1953 she moved to Williams Lake with her husband Dr. Barney Ringwood. She became active in the Williams Lake Players Club, writing and directing plays like The Road Runs North, a musical celebrating Canada's 1967 Centennial. She was the recipient of several awards including the Eric Hamber Trophy and the Governor General's Award for outstanding service to Canadian drama, as well as two doctorates from the University of Victoria and the University of Lethbridge. She wrote more than 60 plays. She died on the 24 of May in 1984 in Chimney Lake in the Cariboo.

The author and journalist Sage Birchwater recalled Ringwood in 2017.

"I met Gwen Pharis Ringwood in Williams Lake after I showed up there in 1973. Gwen was a well-known Canadian playwright who had been in the Williams Lake and Cariboo area for more than twenty years by that time.

"Gwen was a leading light in the arts community in Williams Lake. An outdoor theatre was named after her in Boitanio Park and a number of her plays had been performed across the country.

"I’d been in Williams Lake about four years when Gwen gave a writing workshop at her place on Chimney Lake where she and her retired MD husband, Barney Ringwood, lived. It was at this workshop in 1977, a month or two before I took everything I owned and headed west to the Chilcotin to get lost in the wilderness, that Gwen offered this advice."