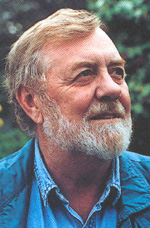 
Kevin Roberts of Lantzville was born in Adelaide, Australia, in 1940 and arrived in B.C. in 1965 to teach in Dawson Creek. For many years Kevin Roberts taught English and Creative Writing at Malaspina University College.

His first novel Tears in a Glass is a monologue by an Australian soldier who has gone AWOL from the Vietnam War. His collections of fiction are Flash Harry and the Daughters of Divine Light and Picking the Morning Colour. He has published thirteen poetry books, including Deep Line, based on his experiences operating a commercial salmon trolling boat, and S'Ney'mos, about early Nanaimo coal mining and its effects on Aboriginals. Stonefish examines the life of Gauguin in Tahiti. Cobalt 3 is a gripping and courageously frank memoir about coping with cancer.

Writing the Tides contains selected poems as well as unpublished work collected over a three-year period, notably his Mah Fung poem that describes the privations of an indentured Chinese coal mine worker in 1873 in Nanaimo. "There was no written history of the Chinese miners who lived and died in the coal mines in those times," Roberts says, "so I invented this persona who was tragically exploited in both countries. His life was reduced by the Coal managers to a mere number because they could not pronounce his name."

Lions is told from the eyes of a small boy and his family in Adelaide in World War II. It offers both poignant and comical events which reveal the deep tension and fear of the relentless Japanese advance towards Australia.

Including a hockey team called the Didgeridoo All-Stars, Kevin Roberts' novel She'll be Right (Pilot Hill Press) is a comic mystery that revisits Kitsilano when it was still a Yuppie-free zone. "I didn't want to write a standard book of fiction,"; Roberts says, "I wanted to write something original, a true 'novel.'"; The quest of the protagonist Imogen to uncover the identity of her parents leads her to an enclave of Australians living in Fred's House on East 1st Avenue in Vancouver, as well as Adelaide, Mexico, Telegraph Creek and Vancouver Island. With the help of her Australian boyfriend, Imogen wants to unravel her genetic background partly for the sake of her unborn child. Those were days, my friend, we thought they'd never end. She'll be Right is the second release from a literary press on Saltspring Island, operated by writers William Gough and Caren Moon. "May our books be carried around the world like lanterns,"; writes Gough, "each holding a necessary spark.";

Also from Gough's press, Kevin Roberts' Helsingor: The True Story of Hamlet and Horatio (Pilot Hill 2010) is a limited edition novel that focuses on the buffoon-like character of Horatio, a would-be actor, and his friendship with the Shakespearean tragic hero Hamlet that arises from their raucous student days in Wittenburg. Roberts offers a tragic-comic exploration of the court intrigues at Elsinor, leading to the death of the Prince of Denmark. Helsingor is the name of the castle from which Horatio tells the tale of how the upstart Fortinbras eventually usurped power from Hamlet.


A big book at a very attractive price (how does Ronsdale do it?), Writing the Tides covers more than three decades of varied and accessible poetry for arm-chair travelers. While not stretching the boundaries of language, Kevin Roberts is always personal and never obscure. "Cobalt 3,"; a group of poems about his experience of cancer treatment, is highly recommended reading for everyone whose lives have been touched by cancer. "At first you're frantic / swim madly for shore / but you're too weak / in the tide rip's / all mindless muscle /you tread water."; Writing the Tides concludes with about fifty new poems: surfing and aging in B.C., Australia and Thailand. Roberts concludes, "And so we all surf, sit in rows / seek the perfect wave . . . to dance us down to some imagined shore."; 1-55380-036-2


When Kevin Roberts was told in 1987 that he had non-Hodgkin's Lymphoma in an advanced stage, he was struck by shock, anger, panic and the huge eyes of his wife. "I'm going to beat this bastard,"; he decided.

He travelled from Lantzville two or three times a week to North Vancouver for chemotherapy treatments. He felt foolish for having ignored those lumps, for ignoring the advice of his GP, an internal medicine specialist and his wife. Now he felt very sick, weak and depressed. His hair fell out. He was on an inadequate disability pension. "Few people realize how costly it is to get sick,"; he says.

He felt like an actor in a bad TV role. He was playing everybody else's script. The doctors and the fearful family tried to direct; friends offered how-to-die books, drowned him in sympathy or averted their eyes. He wanted his old role back. "They expect butterfly grace,"; he says, "and the best you can do is imitate a crawling chemo caterpillar. And you realize, suddenly, you're a professional actor in a role unrehearsed that everybody plays only once.";

He began to hate the ferry ride from Departure Bay to Vancouver. After a roller-coaster ride of reprieves and setbacks, he asked for a radical barrage of radiation treatment. His doctors said it would be too dangerous. He left the Cancer Clinic and peered blindly into the window of Future Shop, pretending to be another shopper hunting for bargains on a surrealistic sidewalk.

Roberts took the Greyhound to Edmonton where he received reluctant permission to have a series of 21 shots. This forced his cancer doctors in Vancouver to relent.

"Radiation is a shocker,"; he wrote recently. "My stomach and bowels gave me initially 30 minutes to get to the bathroom at my rented flat. By the 17th shot in Cobalt 3 I was down to 12 minutes flat. I ran or staggered to my car. My blood count was so low that after the 17th shot they sent me home to eat spinach. The hardest thing I have ever done is go back for the last four shots of radiation.";

That was almost ten years ago. The title of Kevin Roberts' Cobalt 3 (Ronsdale $13.95) refers to the radiation room where Roberts was treated in Vancouver. In 40 concise poems he has recounted in gruesome, vivid detail his four-year struggle that proved victorious.

There are plenty of descriptions of painful treatment as in the harrowing poem called Marrow: "The doc's done this 1,000 times, chats/as he flips up your green coat/you grip the thin rails in the bedstead/ a quick prick, the flesh on your hip/freezes distant and dumb/ strangely foreign and far off/the big needle bites into mute/flesh, then, a sudden punch/chunk that shudders your whole/frame, steel stuck in your very/bone/ your fists grip the bedstead/needle digs ice cold hole in your hip/ doc pulls the plunger up, still/chatty, your teeth grind down/he retracts, you flop like a gunshot/deer/he walks off with a pink/snowstorm of marrow in the tube.";

Born in Australia, Roberts has lived for many years in Lantzville and teaches at Malaspina College. He has written 11 books of poetry, eight plays, two collections of short stories and a novel, Tears in a Glass Eye. He says he couldn't have recreated his anguished journey in prose. He wanted instead a mosaic of moodiness, despair and hope to capture the alienation of being a cancer patient.

Cobalt 3 describes, unflinchingly, "the rat stink fear, muscletight/chest, watery flush in your belly/hair fallen on your pillow/hairless groin, puffed up baby face/the coppery panic taste";. But in the same poem he distills the strange sensation of trying to get on with life. "...but outside the landscape has mutated/the sure path down tilts upward/to a weird sunlit hill ahead";.

Kevin Roberts began writing Cobalt 3 about five years ago after re-reading John Donne's 'No man is an island' poem. He decided Donne's famous message was grandiose nonsense. "Born alone, we die alone,"; he says, "and cancer culls us from the herd in huge numbers."; Now he knows he is one of the lucky ones, but he won't take credit for his remission. He won a stubborn battle that could have gone the other way.