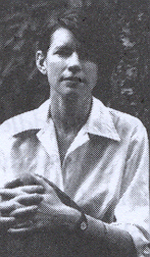 
Born in Toronto, Lisa Robertson came to British Columbia in 1979, living at Saltspring Island before moving to Vancouver and becoming active in the Kootenay School of Writing collective. On the West Coast she worked as a bookseller, served on the board of Artspeak Gallery and wrote a column for MIX Magazine in Toronto. A recipient of a visiting fellowship at Cambridge University, Robertson moved to the Vienne region France.

Lisa Robertson's first collection of poetry called XEclogue was released by Tsunami Editions of Vancouver in 1993 and later republished by New Star Books in 1999. It has been described as "an exploration of the pleasures of pastoral poetry from a late-twentieth-century feminist perspective." As an editor of Raddle Moon, she published "a subversive vision of the world through female eyes" entitled Debbie: An Epic (New Star, 1998). Shortlisted for a Governor General's Award, it had been pre-sold to Reality Street Editions of England for European rights.

Lisa Robertson's The Weather was translated into French by Eric SuchÃ¨re for Ã©ditions Nous, and into Swedish by Niclas Nilsson for RÃ¡mus FÃ¶rlag. The deals were arranged by Bill Hannah of Acacia House Publishing Services.