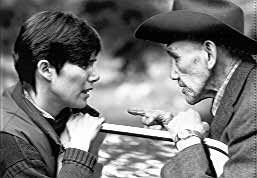 
LITERARY LOCATION: Chopaka, an unincorporated settlement on the west bank of the Similkameen River. The hometown of Harry Robinson now mostly comprises two Indian Reserves, Chopaka IR No. 7 and No. 8, near the little-used U.S./Canada border crossing, open from 9 a.m to 5 p.m. [49° 0' 0.43" N, 119° 40' 15.15" W] The closest B.C. town is Cawston on Highway 3 located 8 kilometres east of Keremeos and 36 kilometres west of Osoyoos.

A longtime rancher and member of the Lower Similkameen Indian band, Harry Robinson devoted much of the later part of his life to telling and retelling stories that he first heard from his partially blind grandmother Louise Newhmkin on her Chopaka ranch where he mainly grew up. Other mentors for Harry Robinson included Mary Narcisse, reputed to be 116 when she died in 1944; John Ashnola, who died during the 1918 flu epidemic at age 98, as well as Alex Skeuce, old Pierre and old Christine. From 1977 to 1990, when Robinson was living near Hedley, B.C (and later in seniors' homes in Westbank and Keremeos), he passed along his stories to Wendy Wickwire who published them in a series of three volumes.

Harry Robinson was born in Oyama near Kelowna on October 8, 1900 but he mostly grew up in Chopaka. The name Chopaka recalls a legendary hunter who was turned to stone as Chopaka Mountain by Coyote, the trickster. "When I become to be six years old,"; Harry Robinson told Wendy Wickwire, "They begin to tell me and they keep on telling me every once in a while, seems to be right along until 1918. I got enough people to tell me. That's why I know. The older I get, [it] seems to come back on me.... Maybe God thought I should get back and remember so I could tell. Could be. I don't know. I like to tell anyone, white people or Indian.";

With the help of Margaret Holding, Harry Robinson learned to read and write English in his early twenties. Weary of itinerant ranching and farming jobs, Robinson bought his first suit from a second-hand store in Oroville and married Matilda, a widow ten years his senior, on December 9, 1924. By the 1950s they had acquired four large ranches near Chopaka and Ashnola. The daughter of a local chief, John Shiweelkin, Matilda had also grown up in the Similkameen.

Childless and burdened by a hip injury in 1956, Harry Robinson sold his ranches in 1973, two years after Matilda died on March 26, 1971. On August 24, 1977, Robinson was living in retirement in a rented bungalow in Hedley when he met a non-Aboriginal graduate student from Nova Scotia, Wendy Wickwire, who was introduced by mutual friends.

On the evening before they all went to the Omak rodeo in Washington State, Harry launched into a story after dinner and continued until almost midnight. That experience drew Wickwire back to the Similkameen Valley for the next thirteen years, with her Uher reel-to-reel tape recorder, transcribing and editing Robinson's stories, narrated by him in English.

"I tell stories for 21 hours or more when I get started," he told Wickwire. "Kind of hard to believe, but I do, because this (is) my job. I'm a storyteller."

Wickwire lived in Merritt and Lytton on and off between 1977 and the mid-1980s, immersing herself in Aboriginal culture for a Ph.D. dissertation on Indian song. "I went to Lytton, to Spences Bridge, to Spuzzum, and all over to get a bigger cross-section of songs. Then I got to spend the whole year in the Nicola Valley, near Merritt, living in a cabin and tripping out to find people to record. During this time Harry kept telling me his stories.";

Wickwire first broached the idea of putting Harry Robinson's stories into book form in 1984 and he approved. "I'm going to disappear,"; Robinson said, "and there'll be no more telling stories.";

For years Harry Robinson would wait for Wickwire at the bus stop outside his home near Hedley, waiting for her to climb into his old green Ford pickup truck so he could tell more stories. "We'd go out to dinner and he'd tell stories all night. The next day we'd drop around to all of the various places in town, buying groceries at the general store, or sightseeing or something, and I'd make him dinner, and then we'd spend another night telling stories. I'd come back and go to a rodeo with him, or go on a car trip, or something, and we'd always have a great time. Hanging out, we kind of became like grandfather and granddaughter.";

This collaboration produced three volumes of stories, Write It On Your Heart: The Epic World of an Okanagan Storyteller (1989), a finalist for the Roderick Haig-Brown Regional Prize when Robinson was 89; Nature Power: In the Spirit of an Okanagan Storyteller (1992), winner of the Roderick Haig-Brown Regional Prize in 1993; and Living by Stories: A Journey of Landscape and Memory (2005).

The three volumes included a good selection of old stories ("Chap-TEEK-whl") about Old Coyote and his exploits at "the beginning of time." This was the time of the animal-people. Robinson also told numerous stories about the new quasi-monsters, SHAmas (whites), who dispossessed "Indians"; of their lands and rights. This was the world of the human people. To distinguish these latter stories from his "Chap-TEEK-whl," he called the latter stories, "Shmee-MA-ee." Robinson was always willing to incorporate modern influences such as "God" or "Big Chief" within his evolving world view.

"A good example of Harry's ability to incorporate current events in a meaningful way in his stories,"; writes Wickwire, "is his interpretation of the landing on the moon of the American astronaut Neil Armstrong. When the news of this event reached Harry, it was not surprising to him at all because he knew that Coyote's son had gone there years ago. The white people were naive, he concluded.

"Armstrong was not the first to land on the moon. He had simply followed the path that Coyote's son had learned about long ago, which is recorded in the old story, "Coyote Plays a Dirty Trick."; In this story, Harry sees the earth orbit and the moon orbit of the Apollo mission as the two 'stopping points' so critical to Coyote's son's return to earth.";

Eventually Harry Robinson needed full-time medical attention for a worsening leg ulcer. He went to live at Pine Acres senior citizens home near Kelowna, in Westbank. "It was very sterile,"; Wickwire recalls. "He was used to driving his old pickup truck into town and getting his mail, and having lots of visitors come to his house."; Robinson later moved to a senior citizens' facility in Keremeos to be closer to home. His condition deteriorated when his artificial hip dislodged and caused serious infection. He had 24-hour care at Mountain View Manor in Keremeos until he died on January 25, 1990.

[Photo of Wendy Wickwire with Harry Robinson by Robert Semeniuk]

Robinson, Harry. Write It On Your Heart: The Epic World of an Okanagan Storyteller (Theytus/Talon, 1989). Compiled and edited by Wendy Wickwire.

Robinson, Harry. Nature Power: In the Spirit of an Okanagan Storyteller (Douglas & McIntyre, 1992). Compiled and edited by Wendy Wickwire.

Robinson, Harry. Living by Stories: A Journey of Landscape and Memory (Talonbooks, 2005). With CD. Compiled and edited by Wendy Wickwire.

Articles: 1 Article for this author
Nature Power: In the Spirit of an Okanagan Storyteller
Press Release, 2004


Many of the stories in Harry Robinson's second collection feature the shoo-MISH, or "nature helpers" that assist humans and sometimes provide them with special powers. Some tell of individuals who use these powers to heal themselves; others tell of Indian doctors who have been given the power to heal others. Still others tell of power encounters: a woman "comes alive" after death; a boy meets a singing squirrel; a voice from nowhere predicts the future.

"Epic, mesmerizing tales by a great Okanagan storyteller that lift [one] eerily and movingly, into a different world."
Michele Landsberg, Toronto Star

"Nowhere have I read a more productive synthesis of the Indian oral tradition and the written word. A few other books have come close, but only close."
Terry Glavin, Vancouver Sun