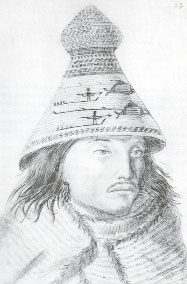 
Chiefs Cuneah of the Haida, Maquinna of the Nuu-chah-nulth and Legaik of the Tsimshian are the subjects for Michael P. Robinson's Sea Otter Chiefs (1996). During the initial phase of maritime exploration and trade in sea otter pelts, the best-known of these was Maquinna, a shrewd bargainer who became conversant in several languages as he controlled Nootka Sound for at least 30 years (1788-1817), although possibly there were two Maquinnas during this period. Robinson's manuscript began as a 1973 Honours Anthropology thesis for Wilson Duff at the University of British Columbia. Forsaking anthropology for law, Robinson rewrote the thesis and first published Sea Otter Chiefs under the imprint of Friendly Cove Press in 1978. While mainly employed as the Executive Director of the Arctic Institute at the University of Calgary, Robinson republished the work from Calgary. Its dedication pays tribute to Terry and Ray Williams, the Mowachaht couple who have steadfastly remained as the lone residents of Friendly Cove after the Department of Indian and Northern Affairs convinced the Mowachaht to forsake Yuquot in favour of Gold River in 1967. A Rhodes Scholar at Oxford, Michael P. Robinson also worked as a chokerman in the Queen Charlottes and as an outdoor educator at Stratchona Park.