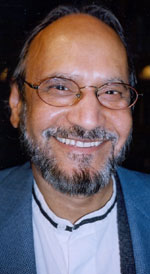 
Born in India in 1940, Ajmer Rode emigrated in 1966 and came to Vancouver in the early 1970s. He was co-ordinator of the first Canadian-Punjabi literary conference in B.C. and is a founding member of several Indo-Canadian literary and performing arts associations. He has written, directed and acted in plays of Punjabi theatre, and has published books in India and books of poetry in English including Poems At My Doorstep and Blue Meditations.

Most of his poetry is included in his 1000-page book Leela (co-author N. Bharati) critically acclaimed as an outstanding work of 20th century Punjabi poetry. Ajmer Rode is considered founder of Canadian Punjabi drama and his full length play Komagata Maru was digitized and published on-line by Simon Fraser University. In conjunction with illustrator Jarnal Singh, he has since published A Journey with the Endless Eye: Stories of the Komagata Maru Incident (Ekstasis Editions 2015).

The volume was one of several books that appeared to mark the one hundredth anniversary of the controversial event of May 2014 when the Komagata Maru, a steamship carrying 376 Indian passengers, mostly Sikhs, was denied moorage in Vancouver's harbour on May 23rd. The resulting standoff proved tragic when the ship was eventually forced to return to India. Many of the passengers were ex-military men who had made sacrifices for the British empire in wars and expected no problem in immigrating from one British colony to the other. This voyage was a deliberate testing of a discriminatory law which forbade immigration by sea unless would-be immigrants sailed directly from India. Denied food and water in Vancouver harbour, the would-be Candians were mostly forced back to the Indian port of Budge Budge Ghat, near Calcutta, where British-India police fired on them, killing several and injuring many more. Jarnail Singh of Surrey is an artist, illustrator, designer, photographer, and art journalist who immigrated to Canada in 2000. His artwork frequently portrays Sikh Gurus, historical events and Punjabi folklore.


In conjunction with the apology given in Parlament by Prime Minister Trudeau on May 18th, 2016, Ekstasis Editions has published the definitive volume on the Komagata Maru incident, the foundation of the art exhibition "A Journey with the Endless Eye."; Paintings
from the Ekstasis volume will be on permanent display at Carleton University.

The permanent exhibition of ten Komagata Maru paintings by eminent Indo-Canadian painter Jarnail Singh will be opened by Carleton University President Dr. Roseann Runte at 4 pm on 18 May 2016, the day the Honorable Prime Minister Justin Trudeau offers his Komagata Maru apology in the House of Commons. In addition, the book A Journey With the Endless Eye: Stories of the Komagata Maru Incident will be highlighted at the opening of the exhibition at the University; the book includes stories by Ajmer Rode and paintings by Jarnail Singh, including the 10 paintings exhibited. The exhibition will continue to remind us that our eyes must remain open endlessly to watch and oppose injustice of any kind, here or anywhere.

We laud Carleton University and Barj Dhahan, a founding donor and board member of Canada India Centre for Excellence at Carleton, for rendering this exemplary service to our community and country. We hope this unique initiative will inspire others to support arts and give due importance to creative works while commemorating historical events. Several dignitaries are expected to attend the opening. All living in or around Ottawa, indeed
anywhere, are welcome to attend the event.

A Journey With the Endless Eye is published by Richard Olafson of Ekstasis Editions, Victoria. The Komagata Maru steamship with 376 Indian passengers arrived in Vancouver on 23 May 1914. Many of the passengers were ex-military men who had made sacrifices for the British empire in wars and expected no problem in immigrating from one British colony to another. But to their dismay Canadian Immigration imprisoned them in their own ship, refusing them water and food and forcing them back in humiliation after two months.

Jarnail Singh is an artist, illustrator, designer, photographer, and art journalist. He resides in Surrey, British Columbia since immigrating to Canada in 2000, and has become the most popular and sought-after artist of Punjabi origin in Canada.