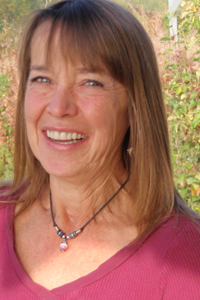 
Born in Vancouver, Métis-Canadian Janet Romain has lived most of her life in Northern B.C., being everything from a short-order cook to a lumber grader. She now runs an organically managed farm with her husband near Fort Fraser, B.C.

In her first novel, Grandpere (Caitlin, 2011), we are introduced to a ninety-seven-year-old native elder, Simon Walker, who is living his final years with his Métis granddaughter, Anzel O'Flaherty. His health is failing, and Anzel writes down his stories, the real ones passed down by his culture, as well as his life memories for her family. Their family grows when a thirteen-year-old, previously unknown granddaughter named Angel, needs sanctuary, running away from terrible circumstances. Anzel takes a job in the community garden and meets a man who sparks her romantic interest. The unique, sometimes shamanic help that Simon provides helps the family through death, divorce, revenge, protection and healing. When Anzel decides to take her grandfather into her home, she doesn't know that his repugnance for old age homes and modern practices will lead her to help him carry out the now illegal method of his interment.

In her second book, Not My Fate: The Story of a Nisga'a Survivor (Caitlin 2016), Janet Romain recounts the life story of her friend, Josephine (Jo) Caplin, who was forced to overcome maternal abandonment, alcoholism and epileptic seizures. After she was removed as a third grader from the care of her father, brother and uncle due to alcoholism in the family, she endured foster homes without any family contact until age fourteen. Burdened by symptoms of fetal alcohol syndrome and abuse by sadistic men, Caplin was nonetheless determined to decide her own fate and not be a victim. Not My Fate: The Story of A Nisga'a Survivor records her arduous and triumphant creation of a private life of peace and forgiveness.