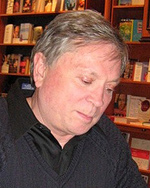 
During the eleven years he worked for the Nisga'a Tribal Council, West Vancouver-based freelance writer and public relations consultant Alex Rose helped design and implement national programs of public education and media relations that laid the groundwork for the successful ratification of the landmark Nisga'a Treaty in May, 2001. With photographer Gary Fiegehen, he also produced three important books. Nisga'a, Bringing Our Ancestors Home: The Repatriation of Nisga'a Artifacts (Nisga'a Tribal Council, 1998) documents the successful struggle to return 300 artifacts and sacred objects that had been looted. It was preceded by Nisga'a: People of the Nass (Douglas and McIntyre, 1992), a coffee table book that received the Roderick Haig-Brown Award in 1993, and Spirit Dance at Meziadin: Chief Joseph Gosnell and the Nisga'a Treaty (Harbour, 2001), a history of the treaty process that credits the fundamental activism of Frank Calder and Jimmy Gosnell during the century-long struggle to receive fair treatment from Victoria.

When Nisga'a chiefs Arthur Gurney, John Wesley and Charles Barton arrived by steamer in Victoria's inner harbour in 1887, Premier William Smithe received their delegation on behalf of the Nisga'a and Tsimshian First Nations by telling them, "When the white man first came among you, you were little better than wild beasts of the field."; The Lands and Works Commission Joseph Trutch, who had already negated the validity of Aboriginal land claims, previously advised in 1872, "Our problem here in British Columbia is nothing other than 30,000 savages."; In spite of such responses, Nisga'a chief Joseph Gosnell was ultimately invited to participate in the Legislative debate on Bill 51: The Nisga'a Final Agreement Act, some 111 years after that first Nisga'a delegation to Victoria, due to the determination and leadership of several key individuals before him, starting with James Teit and Andy Paull. [See entries] The latter was described by Frank Calder as his main 'tutor'.

It was Frank Calder, born in Nass Harbour in 1915, who re-initiated the Nisga'a Land Committee as the Nisga'a Tribal Council in 1955. The turning point in the legal battle to reclaim control of Nisga'a lands occurred in 1963. After two Aboriginal men from Nanaimo named White and Bob were arrested for killing six deer on Crown Land, a young lawyer named Thomas Berger gained an acquittal for them by citing an 1854 document signed by Governor James Douglas that recognized Aboriginal hunting rights. In rendering his verdict, Judge Swencisky also acknowledged the validity of the Royal Proclamation of October, 1763, made prior to Confederation, which confirmed "the Aboriginal right of the Nanaimo Indian tribes to hunt on unoccupied land...has never been abrogated or extinguished and was still in full force and effect."; In aftermath of Regina v. White and Bob, Frank Calder and the Nisga'a secured the services of Thomas Berger to assert their land claims before the Supreme Court of British Columbia as of September 27, 1967.

On behalf of the Nisga'a Tribal Council, Berger cited the imperial legislation of 1763 and argued "no part of the said territory was ever ceded to or purchased by Great Britain or the United Kingdom and no part of the said territory was ever ceded to or purchased by the Colony of British Columbia."; To bolster its case, the Nisga'a called Frank Calder as one of its first witnesses. His role was semi-legendary. The story goes that in 1915, after Arthur Calder (aka Chief Na-qua-oon), the former head of the Nisga'a Land Committee, lost his infant son while travelling on the Nass River, an elderly woman had a vision and announced that Arthur Calder's sister-in-law was pregnant with the reincarnated child. This baby was given to the Arthur Calder and his wife to be raised as their own, as Frank Calder. The chief took his son at age four to his discussions with other chiefs about land claims, grooming him for the future. Frank Calder recalled, "Arthur Calder picked me up and stood me on the table and said to the gathering, 'And this is the boy I am going to send to the white area, and I'm going to make him speak like a white man, I'm going to make him walk like a white man, I'm going to make him eat like a white man... and he is the one that's going to bring this case to the highest court in the land."; From age nine, Frank Calder participated in the Nisga'a land committee meetings. Educated at the Coqualeetza Residential School near Chilliwack, he became the first Status Indian to attend the University of British Columbia where he graduated from the Anglican Theological College in 1946. Choosing politics over ordination, he assumed the title of Chief Na-qua-oon ("long arm";) in 1958. Calder declared, "We are the true owners of British Columbia. The Indians across the province own everything-the rivers, the trees, the bugs, the animals... We are willing to share, and have said so thousands of times. Aboriginal title is the starting point for negotiations.";

After he questioned Frank Calder in court, Tom Berger called upon the anthropologist Wilson Duff for expert testimony. Wilson Duff explained the traditional relationship of the Nisga'a to their land, affirmed the Nisga'a had a precise notion of property and he elaborated as to how their hereditary kinship system maintained oral documentation of the ownership rights. Mr. Justice Gould nonetheless rejected the Nisga'a claim in 1969. He did so by declaring the Nass Valley had been terra incognita when the Royal Proclamation of 1763 was issued. When the appeal court of British Columbia unanimously upheld Gould's ruling in May of 1970, Justice H.W. Davey decided the Nisga'a were "undoubtedly at the time of settlement a very primitive people with few of the institutions of civilized society."; Although Justice Davey accepted Wilson Duff's testimony about the known boundaries of Nisga'a land, he concluded these "had no connection with notions of ownership of particular parcels of lands.";

In November of 1971 the Calder Case was appealed to the Supreme Court of Canada for five days of hearing. Fourteen months later, the seven judges issued an historic split decision in February of 1973. A seventh judge dismissed the case on a technicality and failed the address the fundamental question of Aboriginal title. The co-called Calder Case remained in abeyance, but Frank Calder was no longer at the forefront. Having worked in fish canning and forestry in the north, Calder had been elected provincially for the CCF in 1949, making him the first Aboriginal elected to a Canadian legislature. After he was re-elected as the NDP provincial candidate for the constituency of Atlin in 1972, Calder became the first Aboriginal cabinet minister in Canada. In that same year the federal Liberals were returned to power as a minority government under Pierre Trudeau. In the aftermath of the Supreme Court split decision of 1973, an all-party Standing Committee on Indian and Northern Affairs approved a motion that insisted Aboriginal land claims must be settled where treaties had not previously extinguished Aboriginal title. This led to an announcement from Minister of Indian Affairs Jean ChrÃ©tien on August 8, 1973 that reiterated the declaration of the all-party Standing Committee. Calder might have remained integral to the progress of Calder Case-despite an obvious conflict of interest-but for a scandalous incident in July of 1973 involving alcohol, a woman and vehicle parked in the middle of an intersection. Despite Calder's denial of any wrongdoing, he was dismissed from provincial Cabinet and in 1974 he was defeated for his long-standing presidency (since 1955) of the Nisga'a Tribal Council by James Gosnell, who was nine years younger.

After briefly attending the Coqualeetza Residential School, James Gosnell, like his father, had become a successful gillnet fisherman. While raising 14 children, he served a 14-year term as chief councillor at Gitlakdamiks. More assertive than Calder, Gosnell was a firebrand who caught the attention of the public, whether they liked it or not. "You're damn tootin' we're proposing a third order of government,"; he said. "They just expect us to live like monkeys in a cage. They give us a couple of peanuts every now and then to live on while they themselves are living like kings... We're the true owners of this land of ours. That's what gets me so bloody fed up and I'm not going to quit and I won't trust anybody. Never trust anybody, because nobody has been good to us, you and me. Nobody. And that's why we should have self-government. They want to erase us forever, that's why. You better believe it. But they're not going to erase my name forever."; James Gosnell met with federal negotiators in January of 1976 and continued the prolonged discussions until he died of cancer in a Prince Rupert hospital in August of 1988. His brother Joseph Gosnell took over the long fight.

Spirit Dance at Meziadin: Chief Joseph Gosnell and the Nisga'a Treaty (2001) contains Joseph Gosnell's historic address to the B.C. Legislature on December 2, 1998 to argue on behalf of Bill 51. After almost five months of debate, Premier Glen Clark invoked closure and the Bill passed along party lines on April 22, 1999 after fierce opposition from Gordon Campbell and the provincial Liberals. The House of Commons in Ottawa summarily approved the Nisga'a treaty on December 13, 1999 by a vote of 217 to 48. Governor General Adrienne Clarkson gave royal assent on April 13, 2000. The first elections for restricted self-government were held in November of 2000 during which non-Nisga'a on Nisga'a lands were not entitled to vote or run for office.

The Nisga'a collectively own 1,992 square kilometres of land in the lower Nass Valley. They received a cash settlement of $487.1 million but they must repay $51.3 million to the federal government for the process of negotiation. Spirit Dance at Meziadin outlines the nature of the legal and jurisdictional relations between the Nisga'a and federal/provincial governments.

Written as a narrative mystery, Alex Rose's Who Killed the Grand Banks? (Wiley $36.95) investigates the collapse the collapse of Canada's most famous fishery 16 years after Canada's Minister of Fisheries and Oceans announced a moratorium on Northern cod stocks. Rose provides comprehensive answers and identifies culpable parties as a follow-up to recent investigation of eco-tourism, North of Cape Caution (Raincoast).