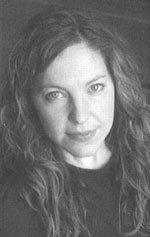 
Born in Quebec in 1972, Laisha Rosnau, grew up in the Okanagan Valley where she now teaches at UBC Okanagan and she lives with her family as resident caretakers of the Bishop Wild Bird Sanctuary in Coldstream.

After a limited edition chapbook of her poetry, Getaway Girl, was published by Greenboathouse Books in 2002, she received the Acorn-Plantos Poetry Prize for Notes on Leaving (Nightwood). Her collection Our Familiar Hunger (Nightwood 2018) won the Dorothy Livesay Poetry Prize in 2019and the 2020 Kobzar Book Award. Her debut novel The Sudden Weight of Snow (M&S) was nominated for the Amazon/Books in Canada First Novel Award.

Vernon in the Okanagan is the primary setting for Little Fortress (Wolsak & Wynn), Laisha Rosnau's novel based on the true story of the Caetani family who were Italian nobility prior to fleeing from fascism, taking in refuge in Cairo and Europe prior to living reclusively in B.C. Rosnau reinvents the entwined lives of the agoraphobic Duchess Ofelia Caetani, her artistic daughter, Sveva Caetani, and their personal secretary, Miss Juul, a diminuative Danish woman with her own storied past. The viewpoint of the secretary describes how the grief-stricken Ofelia eventually "took to her bed" after the death of her husband, the Duke, giving rise to twenty-five years of seclusion in Vernon. Described as "a sweeping and intricate story of friendship, class, trust, betrayal and, ultimately, love," Little Fortress is not the first book dedicated to the mysterious Caetanis. Recapitulation, a hardcover coffee table book published independently in 1995 by Heidi Thompson, is a tribute the life and art of the painter Sveva Caetani (1917-1994). It was followed Daphne Marlatt's Reading Sveva (Talonbooks 2016), also an investigative response to the life and paintings of Sveva. Both were preceded by the lesser-known Caetani di Sermoneta: An Italian family in Vernon, 1921-1994, edited by Catherine Harding for Greater Vernon Museum and Archives in 2003. The Caetani family was one of the oldest in Rome, with many prominent figures in the family history, including popes, scholars, literary figures and statesmen. Born in Rome, Sveva Caetani was of Italian, French, English and Polish descent. Her father, Leone Caetani (1869-1935), Duke of Sermoneta and Prince of Teano, was an Islamic scholar and deputy of the Italian parliament who spoke twelve languages.

Sveva Caetani was born in 1917 in Rome, Italy, of Italian, French, English and Polish descent. The Caetani family was one of the oldest in Rome, with many prominent figures in the family history. When Fascism was on its rise in 1921, Sveva and her parents came to the Okanagan where she was raised in a multilingual household, steeped in European traditions. Her father, Leone Caetani, Duke of Sermoneta and Prince of Teano, had been an Islamic scholar and a radical socialist deputy in the Italian parliament. When Sveva's father died in 1935, she and her mother, Ofelia Fabiani, entered a 25-year home-seclusion out of grief. It wasn't until her mother died that Sveva re-entered the community of Vernon where she flourished with her artistic skill as a painter and a high school teacher. Daphne Marlatt illuminated Sveva's life as a female artist and her search for belonging in Reading Sveva (Talonbooks, 2016), after Heidi Thompson edited her tribute, Recapitulation: A Journey (Coldstream Books, 1995). Now Laisha Rosnau's second novel revisits the true story of how the Duke and Duchess came to Vernon as transplanted nobility in 1921. -Ed.

In 1921, fleeing Fascism, the Duke, Leone Caetani di Sermoneta takes his small entourage into voluntary exile in B.C. He brings his mistress, Ofelia Fabiani, and their four-year-old daughter, Sveva, as well as a 32-year-old household staff member, Inge-Marie Juul.

The tale that follows in Little Fortress is related through the voice of Inge-Marie.

In 1906, we meet Inge-Marie as she leaves the family farm at 17 and moves to Copenhagen, hoping for a job and a new life. A sudden and rash decision to accompany a boy she has only known for a few days, to go to yet another rural community in Denmark, seems to put her back to square one, except now she's pregnant.

First, she works as a shop girl, then a bakery assistant; next she's a housekeeper/nanny to two children of a lighthouse keeper who has recently lost his wife. When he proposes to make an honest woman of her, she turns him down and he turns nasty.

In her mid-twenties, she goes back to Copenhagen to find work with the British ambassador and his wife. When that couple is posted to America, the wife introduces Inge-Marie to the Brandts, and she is soon accompanying the wife and her child to join the husband in Cairo where she will run the household and make yet another bad decision.

Eventually she meets the Caetanis.

Although Little Fortress is ostensibly told from the point of view of Inge-Marie, it doubles as the true story of the enigmatic Sveva Caetani, after whom the Caetani Cultural Centre in Vernon is named.

Along the way there will be ten shifts in place and time, and they won't follow chronologically. Why that format? "I experimented with several different structures," author Laisha Rosnau told BC BookWorld, "and finally it was my editor who suggested this one. I wanted the reader to have the feeling of circling around and spiralling through time and memory as I imagined the women must have done during those twenty-five years in isolation in Vernon."

The isolation to which Rosnau is referring is that which Ofelia imposed on Sveva once the Duke died. For years afterwards, it’s only Inge-Marie who ever leaves the house.

The relationship between these three self-exiled females is complex and intriguing; what remains hidden by two of them makes for a perfect denouement.

Little Fortress can be seen as a trust triangle: the woman who deceived a woman who trusted her is the one who is also deceived by a woman that she trusted. Sveva, the dutiful daughter whose life was so narrow and confined, finally sees her life widen and open into friendships and artistic expression.

In her first book, Sudden Weight of Snow (Emblem Editions, 2003), Laisha Rosnau also placed her characters in a rural and claustrophobic B.C. setting. While the protagonist in that book, Harper, was dying to get away, Inge-Marie, the narrative voice in Little Fortress, seems much more resigned to her fate.

In both books, the women made decisions when teenagers to give themselves the lives they initially wanted; and those decisions, not surprisingly, had a lot to do with the wrong men.

In 2010, when Rosnau lived less than two kilometres from the Caetani home, she began to research their story, poring over twenty boxes of material containing the papers and archives of the family and the lesser-known Inge-Marie. Rosnau also interviewed those who knew them and studied Sveva's art and writings.

"One of the biggest challenges," Rosnau says, "was to choose which stories to focus on for the novel, sprawling and shifting in time as it is. I did go down any of a number of rabbit holes. If I were to start writing the novel from the same research today, I would likely end up with a different novel."
978-1-928088-99-8

Articles: 2 Articles for this author
The Sudden Weight of Snow (M&S $34.99)
Info


Welcome to a typical house party in Sawmill Creek, B.C. "The girl hiccuped. 'Yeah, the f___ing couch is on fire! Jeff and Matt are using the fish tank to put it out.' I pushed my way around her and into the living room, my socks soaking up water from the carpet. The couch was smoldering and bright green plastic plants clung limp to the furniture. No fish in sight but I imagined fins and tails pulsing against the upholstery."; A coming-of-age first novel. Rosnau graduated from the UBC Creative Writing program and lives in Vancouver. 0-7710-7580-4


Notes on Leaving, the debut poetry collection written by Laisha Rosnau and published by Nightwood Editions, has won the Acorn-Plantos Award for People's Poetry.

"I was thrilled to find out that Notes on Leaving received the award,"; says Laisha Rosnau. "I'll admit, I was surprised as well since it was nominated in the company of books written by some of my favourite poets who are also more established. To be recognized for my first book of poetry is an absolute honour.

"I think many assume that poetry is best left in the realm of university departments or past centuries and that is something I would love to see change. When someone who doesn't usually read poetry-a great aunt, a friend who is a scientist-reads my work and lets me know they enjoyed it and can relate to it, it is always a great compliment.";

The language of Notes on Leaving is brusque, bright and instinctively fluid: lines and words flow and merge as naturally as they collide head-on. In the world-weary persona of someone who has always found herself on the run ("my mind was farther away than farm and field. . .";), and "prone to breakdowns / of all kins,"; Rosnau energetically conveys sexually charged and angst-ridden desires to urgently abandon a small-town upbringing, among various other lives and identities.

She convincingly presents these primal urges as strikingly and sensuously familiar to us all, "tracing a route down your torso, thrumming south, / the highway swelling with each town, until / you round the last curve, a crescendo, and cross / the river to a place where the city meets itself."; Cutting through time zones that encompass the rural and urban, the remembered and the forgotten, Rosnau reminds us to "pay attention to your surroundings,"; to "watch for potential roadkill,"; and to "compare scars"; along the way.

The Acorn-Plantos Award for People's Poetry, formerly known as the Milton Acorn People's Poetry Award, was established in 1987 and honours the memory and work of Canadian poets Milton Acorn and Ted Plantos. In life, Acorn worked as a fireman, freight handler and longshoreman and deemed himself a troubadour of the working class. He performed at coffee houses in his early career and wrote extensively from the 1950s up until his death in 1986. He was considered one of the most accessible Canadian literary figures of his time, often taking new poets under his wing, one of whom was Plantos. The award recognizes poetry written with the common reader in mind.