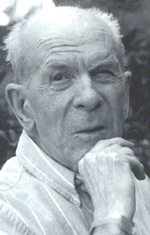 
Sinclair Ross, who received the Order of Canada in 1992, is still revered for his 1941 love story about a preacher and his wife during the dustbowl days of the Depression, As For Me And My House, one of the most-taught novels in Canadian history. His other works include two short story collections and three novels, The Well, Whir of Gold and Sawbones Memorial.

Born in a homestead near Prince Albert, Saskatchewan in 1908, Ross worked on prairie farms before turning to a banking career that lasted until his retirement in 1968 (interrupted only by four years in the Canadian army, 1942-46). Hampered by Parkinson's disease and a sense of personal failure, he resided in Vancouver, in relative obscurity, from 1982 onwards, until his death 14 years later at age 88. The 50th anniversary of the publication of As For Me And My House was marked by a symposium in Ottawa. Author Keath Fraser, who knew Ross for 26 years, provided an intimate and highly perceptive portrait of Ross--describing an attempted suicide and relaying some of Ross' versions of his homosexual encounters--in his revelatory As for Me and My Body: A Memoir of Sinclair Ross (1997). SFU English professor David Stouck elaborates on Fraser's work, and also clarifies and modifies some of Ross' own misleading and boastful statements about his sex life, in a critical biography, As for Sinclair Ross (2005).

The Lamp at Noon and Other Stories (New Canadian Library, McClelland & Stewart, 1968).

Stouck, David (editor). Sinclair Ross's As For Me and My House: Five Decades of Criticism (University of Toronto Press, 1991).

Stouck, David. As for Sinclair Ross (University of Toronto Press, 2005).

Articles: 1 Article for this author
As For Sinclair Ross by David Stouck (University of Toronto Press $45)
Review, 2005


As most graduate students of Canadian Literature can tell you, it was 17 years before Sinclair Ross's sobering story about a preacher and his wife during the dustbowl days of the Depression, As For Me And My House (1941), was reprinted as a New Canadian Library edition, hailed as a classic, and started to be recognized as "Canada's most critically discussed novel."; Two other novels, The Well (1958) and Whir of Gold (1970), received scant attention, and only his fourth novel, Sawbones Memorial (1974) was widely reviewed and praised by the likes of Margaret Laurence and Margaret Atwood. After two collections of short fiction, The Lamp at Noon and Other Stories (1968) and The Race and Other Stories (1982), Ross's writing income remained slight. Few could blame him if he insisted the writing game was not worth the candle. Although the final phase of his life was marred by Parkinson's disease, along with its side-effects of depression and mental confusion, it was during his final 14 years in Vancouver that Sinclair Ross finally received the widespread respect he deserved. This attention, he admitted, made "a drab, frustrated writing career seem a little less so."; Confined to a wheelchair, unable to travel, Ross received honorary degrees, the Order of Canada, and an academic conference on his work-and three distinguished literary visitors. Having first sought out Sinclair Ross in Spain, playwright and novelist Ken Mitchell continued their relationship in letters and used his contacts to produce The Ross File, a programme for CBC radio in Saskatchewan, as well as Sinclair Ross: A Reader's Guide (1981). Novelist Keath Fraser became his most frequent Vancouver visitor, closest friend and confidante. Having first met Ross in Spain, Fraser produced a very readable memoir, As For Me And My Body (1997) which records Ross' embellished versions of his life. Like many writers no longer able to order their experiences by producing fiction, Ross enjoyed fictionalizing his autobiography to some extent, and he had more reasons than most for doing so.

As a gay man in his time, Ross had been forced to live under a veil of secrecy. When times changed-everyone, he said, was coming out of the closet-the freedom to speak openly about his sexual life proved to be a heady experience. He evidently took pleasure in shocking his eager listeners by boasting about his sexual adventures and prowess. It has now fallen to David Stouck, Professor of English at Simon Fraser University, to discern the truth at the heart of Ross's autobiographical fictions. A scholar with a distinguished track record as a literary biographer, Stouck is an attentive and patient listener who also corresponded with Ross. In no haste to publish, Stouck has been able to balance his first-hand observations with careful authentication and painstaking research for As For Sinclair Ross. Seven years after Sinclair Ross's death, the result is a sensitive, even-handed biography, particularly good in his treatment of Ross's sexual history. Stouck has suitably honoured his subject. Sinclair Ross will always be claimed by Saskatchewan-his birthplace in 1908 and the inspiration for most of his fiction-yet Stouck's subject left that province at age 25 and lived most of his life elsewhere. He spent his most creative decade in Winnipeg until enlistment in the army freed him from his work as a bank clerk, and from his domineering mother. He had a good war, serving as an Ordnance clerk for four years in London, where he enjoyed the theatre, and met some prominent British and American literary figures. A memorable experience was hearing T.S. Eliot read and talk about literature.

Back in Canada, he avoided returning to life in his mother's house by moving to Montreal. There he mostly worked for the Royal Bank of Canada until his retirement in 1968 freed him to return to Europe. He had ten good years, living first in Greece and then in Spain, before deteriorating health brought him back to Montreal. He settled in Vancouver, where he mostly lived at the Brock Fahrni Pavilion, a new veterans' wing of the former Shaughnessy Hospital, and died at age 88. 0802043887