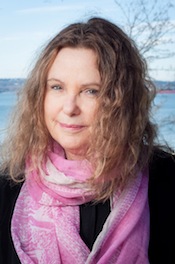 
Lenore Rowntree has followed her brilliant but almost entirely unnoticed linked collection, Dovetail Joint and other stories (Quadra Books 2015) with a first novel, Cluck (Thistledown $19.95), in which we follow the life of a socially awkward man, Henry, as he attempts to navigate through Kitsilano burdened by his mother's bipolar illness and his own sexual repression. He's a radio junkie, an obsessive romantic and a chronic outsider. It was a finalist in The Great BC Novel Contest. Her play The Woods at Tender Creek was produced at the Vancouver East Cultural Centre in 2010. Her short stories and poetry have been published in several Canadian literary journals; her poetry was included in the anthology Best Canadian Poetry 2010. Rowntree grew up in Toronto, then moved to Vancouver where she practiced law, and taught at the university and high school level. She began painting and exhibiting in the 1990s.


When lying in a puddle outside a bar after being mauled by three rednecks who saw feathers coming out of his underwear in the urinal, Henry sees a blueprint in the sky for a massive, knitted chicken cozy, one that will totally cover his mother's house.

Having seen Charity's knitting art show, it makes sense. Henry understands that knit items can stand for something else. A knitted airstream trailer, for example, can represent the home where a young wife was murdered by her husband.
Places where there has been pain or evil need to be covered up, or need attention brought to them in an act of honouring and remembering. So when he is lying there, fighting back pain and tears, Henry connects that concept to his childhood and decides he will cover his mother's house with a gigantic cozy. It's a broken place in need of healing.

Welcome to Cluck by Lenore Rowntree, an entertaining, sad, tragic and funny story about a man whose bi-polar mother left him so friendless, ridiculed and bullied at school that he had to quit school in order to get away from taunts and loneliness-but he stays with her as her guardian.
Cluck almost defies description. It's an upbeat, humorous and yet also poignant and strangely believable novel-original but never daft. Henry emerges as a likeable victim who struggles hugely to find his place in the world against formidable odds. I found myself really caring for this confused and beleaguered protagonist, just ten years old near the outset, and in his fifties by the end of the novel.

"The main research i did was actually on the chickens,"; says Lenore Rowntree. "I lived with someone who has a mental illness, my sister, Beth, who has schizophrenia. She is the real writer in the family. She started experiencing symptoms as a young child.

"Without consciously thinking about it, I took my experience of growing up close to mental illness and exaggerated it for Henry by making him an only child living with a single parent with bipolar disorder. Because my sister was ostracized and I was associated with her, so was I at times. Even when I wasn't the direct target it impacted me because I saw up close how it hurt her.";

Henry cannot bring himself to leave his mother on her own even though she is often out of control and she's always embarrassing him, thwarting any of his attempts to have a social life. Although Henry is friendless, joyless and a bit weird, he has not allowed his pain to corrupt his basically caring nature or distort his gentle sense of humour.

Henry could have opted out of looking after his mother after quitting school. Instead he went after a job he really wanted, studying hard and slogging for three years as an apprentice before finally becoming an accredited poultry technician with Agriculture Canada.

Yup, looking after chickens is Henry's dream job. Except for his boss, Elaine. Cluck follows Henry to Idaho where there's a funky radio station, CFOX, as well as a deejay, Jamie Lee, with whom the poultry technician is obsessed.

Here we also meet Charity, the Idaho knitter who holds unusual shows and who initiates 30-year-old Henry into sex when he drunkenly confesses to being a virgin. All the while, through the miracle of fiction, Henry is still lying in that same puddle.

That radio station in Cluck is loosely modeled on Cortes Island's community radio station, CKTZ, 89.5 FM, started in 2004, which the author dedicates her book.

"I first heard it when I was driving a truck on Savary Island,"; says Rowntree, who was a radio junkie as a kid. "I have a cabin there, which is about 20 kilometres south of Cortes Island. I listened to the station a lot when I went to Savary to do a couple of major edits and rewrites of Cluck, and some of the quirkiness of the station crept into me as I rewrote the novel.";
The novel is an extension of a short story Rowntree wrote in the 1980s. "Because of the evolution of this novel from a short story into a longer piece, the rest of the process was a spinning backwards and forwards from the short story. So over the years I thought about Henry from time to time. I took about three years to write it as a focused effort, beginning in 2010. I'm one of those writers who writes to find out what the story is.";

A graduate of UBC's Creative Writing Program, Rowntree also has a collection of short stories, Dovetail Joint (Quadra Books, 2015) and she co-edited and contributed to the anthology Hidden lives: Coming Out on Mental Illness (Brindle & Glass, 2012), a publication to which her sister also contributed. 978-1-77187-108-2