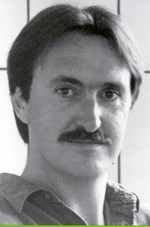 
Sean Russell is one of those non-flavour-of-the-week novelists who don't get invited to Writers Festivals but who will likely out-write most who do.

The Initiate Brother (New York: Daw Books Inc. / Penguin Canada 1991), the first volume of his epic Empire of Wa duology, combines elements of 10th century Japan and 8th century China. "Plague and warfare have swept across the Orient, ravaging the ancient kingdom of Wa, devastating the royal line and leaving a new dynasty on the throne--a new Emperor, Akantsu, filled with fear of all who might seek to wrest the Empire from his grasp. Among those out of favour with the new liege is the Order of the Botahist Monks, whose mystical powers have enabled them to hold positions as Spiritual Advisors to the Imperial court for nearly ten centuries. But Emperor Akantsu fears none so greatly as he does Lord Shonto, the brilliant leader of the most important of the Old Families, whose influence could rally the Great Houses against the throne, and whose adopted daughter, the beautiful and talented Lady Nishima, is the last surviving member of the old royal family. Sent to be military Governor of a northern border province long threatened by barbarian invaders, Lord Shonto knows he is being lured to his death. But Akantsu has underestimated his foe, for not only is Lord Shonto the greatest military genius of the age, but he has with him a Spiritual Adviser from the Botahist Order--a young man gifted with extraordinary martial arts skills and magical abilities, Initiate Brother Shuyn. And even Lord Shonto does not realize the true potential of this young monk. Only time will reveal that Shuyun's magical powers have not seen their equal in nearly a thousand years--not since the Perfect Master himself walked the paths of the Empire..."

The Initiate Brother was followed by Gatherer of Clouds (Daw Books / Penguin 1992) that chronicles Lord Shonto's strategic retreat from the Great Khan after he is betrayed by the Emperor Akantsu II.

Russell proceeded to produce more fantasy series set in different time periods. These include the River Into Darkness series of The Compass of the Soul and Beneath the Vaulted Hills; and the Magic Rise books Sea Without a Shore and World Without End. These were followed by The One Kingdom (Book One of Swan's War) and The Isle of Battle (Book Two of Swan's War).

Born and raised in Toronto, Russell moved to Vancouver in 1973 after attending the University of Waterloo. He was studying the philosophy of language but he chose not to complete his degree. Russell moved to the Comox Valley for 12 years, working at a UBC research farm, and also working as a carpenter. A student of Oriental culture, Russell was working as a training coordinator for Mountain Equipment Co-op in Vancouver when he began publishing. "I accidentally discovered Chinese poetry in high school and it grew from there." An avid sports fan and yachtsman, Russell lived with his family in Vancouver before returning to the Comox Valley.

In 2007 he altered his pen name slightly to S. Thomas Russell for a nautical history thriller, Under Enemy Colours (Penguin), set in the late 18th century. As England once more attempts to rule the waves, this time against revolutionary France, the protagonist is a young lieutenant, Charles Saunders Hayden, son of an English father and a French mother, who must choose between honour and duty.

Articles: 3 Articles for this author
The Isle of Battle: Book Two of the Swan’s War (HarperCollins $39.50)
Info


More than a century has passed since the King of Ayr died without naming an heir-sundering a leaderless kingdom... and fueling the cold-blooded conspiracies of two great houses. Russell lives in Vancouver. 0-380-97490-8

Beneath the Vaulted Hills (Penguin $32.99)
Info


After a priest unearths a tomb using clues from a prophetic old painting, he discovers a labyrinthian cave that hides ancient secrets in Beneath the Vaulted Hills (Penguin $32.99) by yachtsman and Oriental culturist Sean Russell. Set in the same realm as his World Without End and Sea Without a Shore, Russell's latest tome takes place 45 years earlier than his previous works.