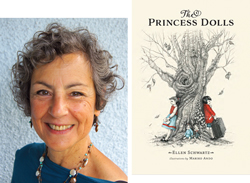 
BIOGRAPHICAL DETAILS: Growing up in New Jersey, Ellen Schwartz wanted to be a dancer. She majored in French at the University of Chicago (1967-1969) and studied special education, with a major in learning disabilities, at the University of Wisconsin (1969-1971). She lived briefly on a commune in Pennsylvania before going 'back to the land' at Galena Bay, near Revelstoke, B.C., in 1972. She and her husband moved to Vancouver with their two daughters, after which she took a creative writing course at UBC called "Writing for Children." She eventually earned her Master of Fine Arts degree in Creative Writing from UBC in 1988. "It was sometime during my first year as a graduate student that I began to realize that writing was something I couldn't live without, something I would do for the rest of my life." She works as a corporate writer, a freelance writer and as an instructor of writing for children courses. Most of her books are written for children, including her Starshine series about Starshine Bliss Shapiro who would have liked her parents to have given her a more conventional name. Born in a cabin in the woods to idealistic parents, she grows up as a vegetarian and spider collector. Initially Schwartz was reticent to accept the workshop approach to writing. "Then I realized I was learning to write through the critiquing process. That works whether you're a student or a teacher." Schwartz transferred some of her appreciation of the craft of writing to her appreciation of seven Canadian female singer-songwriters in Born A Woman, a non-fiction appreciation of Sylvia Tyson, Ferron, Rita MacNeil, Connie Kaldor, Heather Bishop, Lucie Blue Tremblay and Marie-Lynn Hammond. Her juvenile novel Stealing Home concerns a nine-year-old baseball player of mixed black and white heritage in Brooklyn in 1947 when Jackie Robinson is making his famous baseball debut with the Brooklyn Dodgers (after he played professionally for the Montreal Royals in the International League). Her historical novel Yossi's Goal is a follow-up to Jesse's Star about a Russian Jewish immigrant family in Montreal in the 1890s.

The Case of the Missing Deed is a culinary mystery for kids aged 8 to 13 that incorporates recipes into the story. Recipes were provided by Schwartz's daughter, a professional pastry chef. In 2013 it was accorded the Rocky Mountain Book Award Gold Medal in Alberta.

Prior to the internment of Japanese Canadians in British Columbia, in 1942, two young friends named Michiko (Michi) and Esther are both hankering to own the most popular dolls on display in a Vancouver storefront window--the Princess Elizabeth and Princess Margaret dolls, in keeping with the British Empire's idealization of its royal family as heroic figures. The two friends share a birthday so they are simultaneously hoping their wished-for sister dolls might be able to play together. Esther's grandmother, who is deeply concerned about the fate of Jewish relatives in Europe, gives the Elizabeth doll to Esther. When Michi doesn't receive the Margaret doll, jealousy arises and the friendship falters; then it's almost severed when Michiko's family must close their corner store, then they are interned away from the coast. That's the premise for Ellen Schwartz's The Princess Dolls (Tradewind 2018), illustrated by Mariko Ando. For readers aged 9-12. It was shortlisted for the Diamond Foundation Prize for Children/Youth (Western Canada Jewish Book Awards) in 2020.


In the spring of 1947, Jack Roosevelt Robinson stepped up to the plate for the Brooklyn Dodgers as the first black baseball player to play in the major leagues. That's the historical background for Ellen Schwartz's Stealing Home, about nine-year-old Joey who needs to belong somewhere, anywhere. Upon reading American novelist Don DeLillo's Underworld which richly evokes baseball, Schwartz decided to write a book related to the game. She soon found Jackie Robinson's story irresistible. Born in 1919, the grandson of a slave and the youngest of a sharecropper's five children, Robinson was a natural athlete, excelling in football, basketball, baseball and track. He protested for black rights during his army stint, played professional baseball in the Negro Leagues and, when the president of the Brooklyn Dodgers asked him to take part in a "noble experiment,"; he endured abuse from teammates, other players and fans-including hate mail, assault and death threats.

"Get lost, whitebread,"; the black kids taunt Joey Sexton in his 1947 Bronx neighbourhood. "We don't want no crackers in our game."; Joey just wants to play a little schoolyard baseball. Then his mother, only occasionally "off the drugs,"; dies and fatherless Joey is shunted off onto relatives he's never known in Brooklyn. In the Jewish community of his Aunt Frieda and grandfather, he's called Nigger Boy. Half-white, half-black, knowing nothing of synagogues or Shabbas candles, and as a Yankees' fan trapped in Dodgers' territory, Joey also endures the whispered and not-so-whispered gossip about his mother who ran off with a trumpet player. When Joey, caught wearing his Yankees cap, returns home after a scuffle, his grandfather takes one look at the filthy clothes and bleeding face and pronounces Joey a "wild thing, a disgrace.";

Ellen Schwartz grew up in New Jersey in the 50s and 60s where "society was largely segregated,"; she says. "I never knew an African-American person, other than my parents' housekeeper, until black kids were bussed to my junior high school."; Schwartz became involved in the civil rights movement and, later, delving into Robinson's life story just prior to the 60th anniversary of that momentous baseball game, discovered, as does young scrapper Joey, the more she learned about the man, the more she admired his dignity and pride under great adversity. Two other Schwartz titles to be released this fall include Abby's Birds (Tradewind $22.95), illustrated by Elizabeth Shefrin, and Yossi's Goal (Orca $7.95), a sequel to Jesse's Star, which chronicles the further adventures of a Russian Jewish immigrant family living in Montreal in the 1890s.
0-88776-765-6


Jesse has little to write about for a project on his immigrant ancestors until his mother sends him up to the attic to dig through a battered travel case. He slips an old chain with a Star of David over his head, and he's suddenly in a Russian village. It's 1890, and thieving soldiers terrorize the small Jewish community, raiding crops, burning books, and beating or even killing anyone who opposes them. The villagers' only hope is to flee to Canada and it's up to Jesse-called Yossi now-to help them escape the soldiers. Ellen Schwartz, whose own grandparents' escape from Russia was the seed for Jesse's Star (Orca $6.50), is also the author of Mr. Belinsky's Bagels and the Starshine series. 1-55143-143-2


Having already had a bestseller for Michael Katz' Tradewind Books with Mr. Belinsky's Bagels, published in 1997, Ellen Schwartz has concocted another charming cross-cultural story for Katz, this time about a girl named Abby who moves into a neighborhood and befriends an elderly Japanese woman, Mrs. Naka, who teaches her the gentle art of making origami birds.