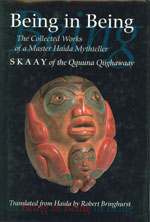 
The third volume of Robert Bringhurst's homage to Haida storytellers and tribal historians is Being in Being: The Collected Works of a Master Haida Mythteller SKAAY of the Qquuna Qiighawaay (2001), again based on the original ethnographic work by linguist John Swanton.

Born in the village of Qquuna around 1827, Skaay devoted his life to telling stories after he was crippled by an injury in middle age. Also known as John Sky, he lived most of his adult years in the village of Ttanuu. Both SKAAY and the other formidable Haida storyteller Ghandl belonged to the Eagle side of the Haida, as opposed to the Raven side.

With a Haida intermediary who spoke English, Skaay dictated the story his maternal lineage to Swanton at Skidegate in October of 1900, as well as the most extensive version of the Raven story ever recorded on the Northwest Coast. Swanton also transcribed what Bringhurst calls "the largest and most complex literary work in any Native Canadian language,"; an epic poem called The Qquuna Cycle, with 5,500 lines. It begins:

According to Bringhurst, who estimates Skaay's work amounts to 15 percent of Swanton's Haida opus, Europeans had been visiting Haida Gwaii for more than a century prior to Swanton's visit, but he was the first outsider to request stories told in Haida. "No outsider asked again for seven decades after that,"; Bringhurst claims, "and by then there was no one alive who had actually known the pre-colonial Haida world.";

[Among John Swanton's major Pacific Northwest publications are Haida Texts and Myths, Skidegate Dialect (1905), Contributions to the Ethnology of the Haida (1905), Haida Texts--Masset Dialect (1908), Social Condition, Beliefs, and Linguistic Relationship of the Tlingit Indians (1908) Tlingit Myths and Texts (1909, Haida Songs (1912) and The Indian Tribes of North America (1952). A festschrift was printed in 1940 to honour Swanton's 40 years of work with the Smithsonian, but none of the articles celebrate his earliest work in British Columbia. Swanton's unpublished southern Haida manuscripts were eventually brought to the American Philosophical Society Library in Philadelphia in 1942.]