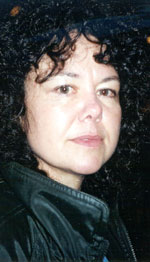 
Madeline Sonik's collection of linked stories, Fontainebleau (stories) (Anvil 2020) is set in a troubled city on the Detroit River full of noxious substances and curses where people struggle to free themselves from bad situations. Then a rash of killings occur that a lovesick policeman tries to solve. There are plenty of suspects.

Afflictions and Departures (Anvil 2011) is Madline Sonik's collection of essays that explore personal experiences from her youth, spanning from the late 1950s to the 1970s, was shortlisted for the Charles Taylor Award in 2012. It later received the ninth annual City of Victoria Butler Book Prize at the Victoria Book Prize Society gala in October, 2012. According to promotional materials, "This is not your traditional memoir. Instead Sonik gives the reader a sense of history how it was lived rather than how it was set down in the history books."

Madeline Sonik is a black cord priestess of 13th House Mystery School and a practicing witch. Her first collection of short fiction, Drying the Bones (Nightwood, 2000), was followed by a first novel entitled Arms (Nightwood, 2002), a tale of healing that doubled as her MFA thesis. Combining Wiccan ritual magic, Gnosticism, and alchemy, Arms is a magic-realist novella that opens with the escape of two teenagers from their warzone of a family home. In a nutshell: When their house blows up, shingles tear off the girl's arms, the brother and sister move into the woods, the boy hides his sister in a shack, he goes back to look for her arms, he gets lost in a city and captured by a man who collects boys and treats them like dogs. A hunter rescues his sister and she follows an extraordinary path of enchantment, marriage, agony, ridicule, ritual and self-realization. Healing comes through words. The girl is told by her arms, "Go. write our story."

Madeline Sonik has co-edited several anthologies including When I Was a Child (Oberon, 2004), Entering the Landscape (Oberon) and Fresh Blood: New Canadian Gothic Fiction (Turnstone Press, 1998). Her children's book is Belinda and the Dustbunnys (Hodgepog Books, 2004), illustrated by Grania Bridal. Sonik's fiction and poetry have appeared in Event, Grain, Pottersfield Portfolio, The New Quarterly, Descant and elsewhere. Born in 1960, she holds an MA in Journalism from the University of Western Ontario and has taught at UBC's Creative Writing department while working towards a doctorate in Education.


Imagination is what saves Belinda, abducted and locked in an attic and watched over by hideous Nursemaid Gulch. But is it enough to reunite the twelve-year-old with her parents? Described as a gothic-comic thriller, Belinda and the Dustbunnys (Hodgepog $12.95) is by UBC writing teacher Madeline Sonik after the "profoundly affecting"; disappearance of Victoria's Michael Dunahee. All author royalties to be donated to Child Find. Illustrations are by Grania Bridal, a surfer living in Sooke. 0-9730831-4-X


This gathering of experiences shakes, and deepens, my sense of the world, its ironies and its sacredness. Madeline Sonik's recent book provides pleasure, information and facts new to me, and elicits feelings and sensations, moving me outside of myself.

From the author's conception during her parents' voyage on the Queen Mary in l959, crossing the Atlantic Ocean from England to the United States, through her late teenage years, we receive a series of pictures of her moving through the world; her personal world as well as the zeitgeist, the spirit of the times. Her writing evokes a different kind of imagery for me; very sharply etched outlines sometimes filled in with muted colors.

Throughout the book we are reminded of the poignant ignorance and innocence of childhood, not knowing the meanings of some words, nor suspecting negative actions of those closest to us. But we recognize in her narratives that a child can naturally be bodywise and follow inner messages, despite a lack of experience. We follow her through the interface of inner and outer; between the author and her world as it is being created.

Many of her afflictions attacked her breathing, or her life spirit. Her mother smoked throughout her pregnancy. Both her parents smoked heavily, creating a polluted home atmosphere, compounded by alcoholism, depression, and compulsiveness on their parts. The chapter on the environmental disaster at the Love Canal, and her descriptions of the effects of chemical residue in the air and ground around Niagara Falls is a brave, in-depth scrutiny of people's carelessness, greed, and apathy.

As a young child, she developed croup several times a year, serving to separate the family at holiday times, to her mother's great relief. In l975 she travelled to Toronto to "get away from this suffocation.";
As a child of her times she experimented with smoking. She spent five years cleaning toilets to support herself, using a toxic cleanser, inhaling its fumes. At the same time, she spent every spare minute in her drafty upstairs apartment writing with a manual typewriter.

In the final essay, she is diagnosed with tuberculosis, from which she does recover. She says, "It would be years before I'd learn, of all the famous writers who'd succumbed to tuberculosis. Writers such as Anton Chekhov, Anne and Emily Bronte, Elizabeth Barrett Browning, Franz Kafka, John Keats, George Orwell, and Robert Louis Stevenson. Writers ...who 'd sat day after day, toiling in the filth and dust of humanity."; Yet, Ms. Sonik taps into her strengths to survive, demonstrating to us all our ability to endure and grow from adversity.