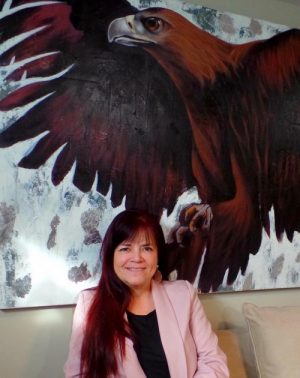 
Teoni Spathelfer is a hereditary member of the Heiltsuk Nation from coastal B.C. She has worked as a publicist; a radio journalist, host and producer; and an arts and music writer. Her documentary Teoni's Dream, informed by her mother's residential school experience, has aired nationwide on CBC Radio.

Spathelfe's first book is about a young Indigenous girl who moves to the big city and learns to find connections to her culture and the land wherever she goes, despite encountering bullies and feelings of isolation along the way.

The second book in the series is about Little Wolf's mother, White Raven who was one of the 150,000 Indigenous children from across Canada who were forced to go to residential school. Eventually, White Raven shares her story with her grandchildren and begins to heal. It brings her family closer. This is a story of survival, healing and family unity.

The third book in the series is Abalone Woman. From publicity: "Throughout her life, Little Wolf has been troubled by the injustice she sees all around her. When she was young, she was bullied for her Indigenous heritage. Her mother, White Raven, spent ten years in a residential school, separated from her family and isolated from her culture. Little Wolf’s own children are growing up in a different, more open society, but hatred and racism still exist. Little Wolf worries about the world her daughters will inherit. One night, a vivid dream helps her realize her own strength as a leader and peacemaker in her community. Told with powerful imagery and symbolism, Abalone Woman presents themes of racism, trauma, and family unity through relatable, age-appropriate narratives."

In her debut book, Little Wolf (Heritage, 2021) Heiltsuk hereditary member Teoni Spathelfer introduces a young girl who must leave her beloved Indigenous village surrounded by nature and move with her family to the big city. It’s not easy adjusting to the concrete jungle, however Little Wolf learns to find connections to her culture and the land wherever she goes, despite encountering bullies and feelings of isolation along the way.

White Raven (Heritage $19.95) is the follow-up and is named after Little Wolf’s mother who was one of the 150,000 Indigenous children from across Canada forced to go to residential school.

Little Wolf is now grown up, married and has three children. The family moves back to the island where Little Wolf was born and she delights in showing her daughters the wilderness and local Indigenous culture.

They particularly enjoy a white shell beach, called a midden. “This was an ancient place, where First Nations people had harvested food and gathered for meals for as long as anyone could remember,” writes Spathelfer. “Along the seashore, they watched orca whales swimming and listening to sea lions barking on foggy days. In the forest, they laughed with pileated woodpeckers and smelled the wildflowers as eagles soared overhead.”

Little Wolf’s mother, whose nickname is White Raven, also returns for visits to the island home and is glad her granddaughters are able to explore and learn about the area. But White Raven is also reminded of her unhappy times at the St. Michael’s Indian Residential School in the far-away village of Alert Bay, which she knows must be shared with her granddaughters.

White Raven eventually begins to tell her stories about having to leave her village and family at the age of six to stay at the residential school for ten months every year. “They lived in the school dormitories, where many beds were crammed into one big room,” writes Spathelfer. “Most nights, White Raven couldn’t sleep.

Someone in the room was always crying because they missed their families.” Many bad things happened. White Raven and the other children had their heads shaved and a dangerous pesticide called DDT applied to their scalps. The school wrongly thought everyone had lice and the DDT was supposed to kill the bugs but it burned the children’s skin “and made them feel like they weren’t good enough.”
The children weren’t fed enough and the food was often rotten. White Raven “sometimes ate toilet paper to make the hunger go away.” She had to work picking up garbage, washing dishes and milking cows. The children never got to drink the fresh milk, which was kept for the staff; instead, the children were given watered-down powdered milk.

White Raven had cousins and sisters nearby at the school and sometimes they were able to play together. There was also a teacher that was nicer than the other staff who took care of White Raven when she was sick.

“Another thing that cheered her up during her time at the school was a rare white-coloured raven, which often landed close to her on the playground,” writes Spathelfer. “It made her happy to see the beautiful bird, and reminded her that she was part of the Raven clan. This is how she got the name White Raven!”

Telling her stories helped White Raven heal and brought the whole family closer. The third book in the series is Abalone Woman (Heritage $19.95) and it will continue with Spathelfer’s themes of racism, trauma and family unity through relatable, age-appropriate narratives. Illustrations in all three books are by Victoria-based artist Natassia Davies who is of Coast Salish ancestry.
White Raven: 9781772033779
Abalone Woman: 9781772034110
(BCBW 2022)