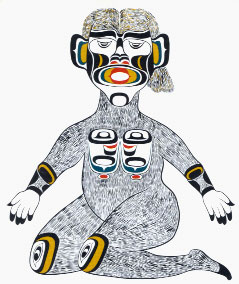 
One of the earliest attempts to seriously discuss and promote Kwakiutl art in print for commercial purposes was Henry Speck's 16-page catalogue Kwakiutl Art (Vancouver: Indian Designs Ltd., 1963) published by New Design Gallery to accompany Speck's first exhibition of 40 watercolours, from March 25 to April 4, 1964. It contained Speck's depictions of supernatural beings from Kwakiutl mythology-including tsonoqua, sea monster, raven, crane, sea wolf, beaver, halibut, sea raven, grizzly bear, frog, killer whale, owl, wolf, otter, octopus, sea eagle, king-of-the-sea and sisiutl-with an essay ("Kwakiutl Art: Its Background and Traditions") by Audrey Hawthorn, curator of the UBC Anthropology Museum. It was re-issued in book format in 1964 and sold for $1.50. All the artwork was available to consumers in silk screen prints, 19" by 24.5". Having once earned one dollar per letter while painting names onto fishing boats, Chief Henry Speck became artistic director of Chief James Sewid's Kwagiutl Big House project that was completed at Alert Bay in 1965.

Born on August 12, 1908, on Turnour Island (also known as Kalugwis), Speck attended the Alert Bay residential school for two years and was initiated as a hamatsa dancer in the Tlowitsis tribe at age fourteen during a potlatch hosted by his uncle, Chief Bob Harris. As a member of the Pentecostal church as of 1952, Speck melded Christian theology and Kwakiutl culture in paintings that were promoted by Vancouver art dealer Gyula Mayer in 1961. Also a carver, Speck proceeded to exhibit at the Simon Fraser University Museum of Archaeology and Ethnology, Meadowland Park Shopping Centre in Edmonton, and the Provincial Museum in Victoria. The Glenbow Museum in Calgary has more than 200 watercolours by Speck. His work has also been collected by National Museum of Man, the Museum of Anthropology, the Campbell River Museum and the San Diego Museum of Man. Speck's Kwakiutl name Ozistalis means "the greatest." Henry Speck died on May 27, 1971.