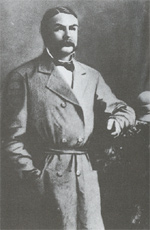 Gilbert Malcolm Sproat was a key figure in the creation of the Indian reserve system through his work with the Joint Indian Reserve Commission in British Columbia between 1876 and 1878. Earlier, Sproat wrote his classic account of life as a lumberman on Alberni Inlet entitled Scenes and Studies of Savage Life (London: 1868). In the process he gave his name to Sproat Lake, west of Port Alberni.

Sproat, the son of a crofter in the Scottish Highlands, was focused on ways to colonize the west effectively through private means in order to promote development instead of land speculation. In his book White Settler Reserve, Ryan Eyford identifies Sproat as playing a key role in advocating for group settlement and colonization. "The whitemen will teach your children to read printing," Sproat said, "and to be like themselves." In retrospect, his life and attitudes can be easily criticized. In the late 1870s he was at the forefront of the Indian Land Commission's efforts to disposses Aboriginals of their lands by inspecting and assigning Indian reservations in British Columbia, but Cole Harris has praised Sproat as a defender of Aboriginal rights in Making Native Space: Colonialism, Resistance and Reserves in British Columbia (UBC Press, 2002).

Gilbert Malcolm Sproat was an energetic, literate character who can be judged harshly or favourably, as one chooses. In the 1860s, when he arrived to establish an Alberni sawmill, he distinguished himself by forcing Indians from their land in return for some trade goods worth 20 pounds. As a land speculator and lay magistrate, 'Judge Sproat' was later dubbed 'Father of the Kootenay'. Sproat founded Revelstoke, Sandon and New Denver, and in 1883 he also placed the first reserve upon the townsite of Nelson, selling the first lots there in 1888 and giving names to its main streets.

Born on a farm in southern Scotland in the County of Kircudbright on April 19, 1834, Gilbert Malcolm Sproat attended school at Borgue and Dumfries. Trained for the India Civil Service, he was hired by a London shipping firm (James Thomson & Co., aka Anderson & Co.) to build a sawmill at the head of Alberni Canal in 1860. The ship brokers had accepted advice to do so from their Victoria agent Captain Edward Stamp. At the time the importation of pitch-pine timber from the southern United Sates was blockaded by Civil War. Sproat and Stamp transported men and machinery to Alberni aboard two ships, the Woodpecker and Meg Merrilies. Upon receiving land grants from Governor James Douglas, Stamp and Sproat commenced operations of their sawmill at the mouth of the Somass River in August of 1861. Theirs was the first mill designed for export of timber products from British Columbia. Upon their arrival, Stamp and Sproat had paid local Indians for the land they appropriated with the equivalent of 20 pounds worth of trade goods.

After relations soured between the mill's owners in London and Stamp--a wheeler-dealer with his own shares in the syndicate--Sproat succeeded Stamp as the local manager for Anderson & Co. in 1862. He oversaw a fishing settlement at Alberni that exported cured fish to Callao, Peru, he married Catherine Anne Wigham in 1862 and he started an insurance business in Victoria. Until 1865, Sproat managed the export of spars to Europe and served as magistrate and Justice of the Peace from 1863 to 1865, having declined Governor Douglas' offer of a seat in the Legislative Council. As Sproat was a frequent visitor to the west coast of Vancouver Island, he was appointed by Governor James Douglas to act as Principal Customs Officer, whose duties included control of the First Nations. Sproat was not eager to become involved in provincial politics because he assumed ultimate power resided in London. "The Colonial Office," he wrote, "did not care two straws for any popular movements here: the battle was in London."

Production at the Anderson mill reached its zenith in 1863 with ten vessels loading spars and timbers simultaneously. Exports that year totalled 11,273,000 feet of sawn lumber and 1,300 spars, plus another one million feet of lumber sent to Victori. But by 1864, Sproat was desperately petitioning James Douglas for help. As early as 1863 he had reported, "to protect our large investment of capital in this place, it will be necessary for us to take up more land under our Land Grant than was thought necessary by our late Manager here, Capt. Edward Stamp." The Alberni sawmill was closed by the outset of 1865. The boom 'n' bust pattern of resource-based industry in British Columbia, begun with the trade in sea otter pelts in the late 18th century, would become the model for forestry for the next century-and-a-half.

Sproat returned to London. There Sproat established 'The London Committee for watching the affairs of British Columbia'. Essentially this was a three-man lobby group for input into the terms of union between the two colonies of Vancouver Island and British Columbia. Sproat also tried to influence the decision as to whether the capital of the united colonies ought to be New Westminster or Victoria. His committee would also address the San Juan boundary dispute.

Throughout his life Sproat was known for his literary abilities. He frequently wrote letters to newspapers, he served as a correspondent for the London Times (1875-1877), he once declined an offer from Theodore Davie to edit a newspaper and he won a $1,000 British Empire essay prize in 1875 for his essay about British Opium Policy in India and China. Sproat translated some of Horace's odes, published a critical work on the poetry of Sir Walter Scott and completed a larger work entitled The Education of the Rural Poor in England. In 1868, based on his experiences, Sproat published his major contribution to British Columbia literature, an acount of Indian life on the west coast of Vancouver Island called Scenes and Studies of Savage Life (London, Smith, Elder & Co. 317 p.). It contains an account of a conversation between the 'Chief of the Seshalts' and Sproat himself, as the representative of the 'King-George-Men', in which Sproat responds to the chief's reluctance to cooperate. "Whether or not, the white men will come," he says. "All your people know that they are your superiors; they make the things which you value. You cannot make muskets, blankets, or bread. The whitemen will teach your children to read printing, and to be like themselves."

Upon his return to British Columbia in the 1870s, Sproat addressed Aboriginal land claims for the provincial and federal governments, serving as a 'one-man commission' until 1880. According to historian Cole Harris, Sproat became an outspoken critic of expropriations undertaken without "intelligent consent" and he maintained Aboriginals held rights to land, water, timber and fisheries. Premier George Walkem subsequently complained, "Sproat is wholly unfit for anything but verbose, voluminous, tiresome correspondence." Full of himself and critical of his superiors, Sproat resigned. His replacement Peter O'Reilly spent the next 18 years creating hundreds of Indian reserves throughout the province, mostly to the detriment of Aboriginals.

Sproat served as a magistrate again, this time in the Kootenays, from 1885 to 1890. In the summer of 1888, Sproat, as the gold commissioner and stipendary magistrate, oversaw land sales in the B.C. interior. He left government service in 1889 but remained in the Kootenays for another nine years, involved in real estate. As a result there arose a town called Sproat near Sidmouth and Mount Sproat rises to 8,000 feet near Arrowhead. On Vancouver Island, Sproat Lake and Sproat River are named after Gilbert Malcolm Sproat, as well as Sproat Bay on Tzartus Island in Barkley Sound. Sproat Lake Provincial Park was ceded to the province in 1966 by MacMillan Bloedel Limited. Before it became a provincial park it was known as Smith's Landing, after George Smith, who farmed the area.

Sproat retired to Victoria in 1898. In consultation with provincial librarians Edward Gosnell and Ethelbert Scholefield, Sproat intended to write a book called The Rise of British Dominion in the North Pacific. "History compiled, say by a committee," he wrote, "as a rule cannot be attractive or instructive." he wrote. Sproat died in Victoria on June 4, 1913 without completing his task. The owner of the Victoria Colonist, Samuel Matson, offered his son Alexander Sproat $1,000 for the manuscript but it was found to be largely illegible, eaten by mice.