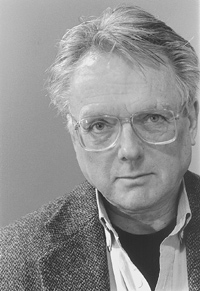 
Born in San Francisco in 1934, poet George Stanley grew up in San Francisco where he became associated with the writing circle of Jack Spicer. Stanley came to Canada in 1971 and taught college English for 26 years, mainly in Terrace, before retiring to live in Vancouver. He became a Canadian citizen in 1978 and received the Shelley Memorial Award in 2006. Vancouver: A Poem was nominated for the Dorothy Livesay Poetry Prize in 2009.

With an introduction by Sharon Thesen, George Stanley's North of California Street (New Star 2014) collects 53 poems originally published between 1973 and 1999 in various now-out-of-print books. They include "Mountains & Air," "Raft," "The Set," "The Berlin Wall," "For Prince George," "Terrace Landscapes" and the 16-part poem "San Francisco's Gone," including "Veracruz."

In 2018, co-published a volume of poetry Some End/West Broadway (New Star $18) with George Bowering. Back to back, one half, titled West Broadway, is narrative and lyrical work from Stanley set along West Broadway, a major arterial road on Vancouver's West Side.

This small book of poems is an unusual enterprise. One side of the book includes 31 new poems by George Bowering. When you flip over this tumble book (or flip book), you find 43 more pages of poetry and prose by George Stanley.

The book cover is made up of two halves of the strong and bright imagery of Jack Shadbolt?s 1995 painting, ?Encounter.?

His most recent books include Writing the Okanagan (Talonbooks, 2015) 10 Women (Anvil, 2015), The Hockey Scribbler (ECW Press, 2016), and The Dad Dialogues (with Charles Demers, Arsenal, 2016). He is an officer of the Order of Canada and a member of the Order of British Columbia.

Born in San Francisco, george Stanley has lived in B.C. since 1971 and has been a Canadian citizen since 1978. He taught English in B.C. community colleges for 26 years, publishing nine books of poetry on the way, the most recent of which are After Desire (2013) and North of California Street (2014), both from New Star. West Broadway is his tenth book of poetry.

Bowering?s half contains a table of contents; George Stanley?s does not.
Early in Bowering?s section he reveals, ?The world speaks to me/in sentences.? We also learn, though, that he fell into a coma for two weeks and that:
Being in a coma can play havoc with your sense of time. It can turn your eyes from brown to blue.

Three years ago he was walking his dog, Mickey, when he collapsed from a cardiac arrest outside the West Point Grey Library. Ivy Zhang, a Grade 8 student, and others helped to get him medical attention in time to save his life and aid in his recovery.

In ?Speech Language,? he detects ??a new understanding that something awful/ this way comes with appetite for you.?
I especially enjoyed his poem about his friendship with Al Purdy, ?The Country North of Summer,? which ends:
The grave wherein my pen pal is laid lies at the bottom of a country road saying his name.

It?s a dandy place to lean against the stone book and read a bunch of poems, except in winter.

In ?The Weight,? Bowering offers recognition to the poet Margaret Avison that he feels she fully deserves. I confess I had not heard of her prior to this?yet she won the Governor General?s Literary Award twice as well as the Griffin Poetry Prize.

George Stanley includes many Vancouver references, including this stanza from ?Our Age (an imitation),? after the Russian poet Anna Akhmatova:
West Point Grey chills in late sunlight, sun?s rays gleam off shop windows & cars, but deep scratches have appeared in some of the house doors, and rows of ravens weigh down the power lines.
In ?To a Young Voter,? Stanley reflects that:
I can?t take politics seriously, at 82 I?m too preoccupied with my own mortality. But I can go ?meta??I can take your taking politics seriously?.
Stanley and Bowering also address poems to each other. Bowering?s starts, ?I?ll be in your poem if you?ll be in mine,? and Stanley responds with his ?Letter to George Bowering:
? Yet out my window the building across Balaclava Kidsbooks used to occupy will come down soon. The city changes faster than the heart. We?re reading our next books.

It reassuring to see these two veteran writers, in their eighties, laughing together in the photo from their Vancouver book launch this year.

Danny Peart has published three books of poetry and stories: Ruined By Love (2012), Stark Naked in a Laundromat: The Port Dalhousie Stories (2016), and Another Mountain to Climb (2017), all published by Milagro Press. He lives in Vancouver.


The Shelley Memorial Award of more than $3,500, established by the will of the late Mary P. Sears, is given to a living American poet selected with reference to genius and need. It was awarded to George Stanley in 2006.

"George Stanley's poems often take place in bars; he's like Charles Bukowski, had Bukowski been a few years younger, a former student of Jack Spicer, queer, brilliant, an expat who departed the United States for Canada during the Vietnam conflict, and honestly marginalized. Perhaps as a cumulative effect of all these causes, Stanley's poetry knows itself to be far from the center, and refuses to make claims on swaggering personality or fake immediacy; neither is he interested in effacing his own presence entirely, in the way of someone who has had quite enough of being the subject of the world.

"These are negative claims, leading to the great negative claim: George Stanley sounds like nobody else. This is true, and rare, and leaves unstated what makes his poetry seem deserving of this award, given "with reference to...genius and need." So, to state it plainly: Stanley's capacity to grasp both the personal and the social, the local and the conceptual -and how they are always reaching for each other, dreaming of each other, failing each other and themselves-is surprising, moving, seductive. It functions as a kind of diagnosis about contemporary poetry, and a vision of what it might do at this late hour; a poetry as eccentric as this moment is eccentric. In the words of noted poet-critic Christopher Nealon, Stanley's writing "has provoked me again and again to ask whether the name to give the struggle to bring together emotion and abstraction, to understand in tandem the intra-psychic and the global, is in fact 'poetics.'"

"Stanley's poems lack all hermetic recalcitrance. They are compellingly direct, as dreams are compellingly direct, from early pieces like 1960's "White Matches" through the last entry in the recent volume of selected poems, A Tall, Serious Girl. That 18-line poem, "Veracruz," captures without parallel the fluidity of imagination-and the melancholy of a free imagination's role in the bound world. It's a love poem like no other love poem- the sort of writing that makes it a strange and desperate pleasure to read George Stanley's work, and a secondary but great pleasure to award him this prize."

an old man, I walked the MalecĂłn by the sea,

and I thought of my father, who when a young man

had walked the MalecĂłn in Havana, dreaming of Brazil,

and I wished he had gone to Brazil

and I wished my father had come back to San Francisco

armed with Brazilian magic, & that he had married

not my mother, but her brother, whom he truly loved.

I wish my father had, like Tiresias, changed himself into a woman,

& that he had been impregnated by my uncle, & given birth to me as a girl.

I wish that I had grown up in San Francisco as a girl,

& that eventually I had come to Veracruz,

& walking on the MalecĂłn, I had met a sailor,

a Mexican sailor or a sailor from some other country-

& that he had married me, & I had become pregnant


Born in San Francisco in 1934, poet George Stanley grew up in San Francisco where he became associated with the writing circle of Jack Spicer. Stanley came to Canada in 1971 and taught college English for 26 years, mainly in Terrace, before retiring to live in Vancouver. He became a Canadian citizen in 1978 and received the Shelley Memorial Award in 2006. Vancouver: A Poem was nominated for the Dorothy Livesay Poetry Prize in 2009. With an introduction by Sharon Thesen, George Stanley's new North of California Street: Selected Poems (New Star $21) gathers 53 poems originally published between 1973 and 1999 in various now-out-of-print books.


Make It True: Poetry from Cascadia (Leaf Press $30) contains writing from Cascadia, the bioregion lying west of the continental divide and spanning from Mt. Logan in Canada to the north and Cape Mendocino in California to the south. Edited by Paul Nelson, with George Stanley, Barry McKinnon and Nadine Maestas, the collection is an attempt to take back poetry culture from the trance cast by pop, consumer and industry-generated culture.