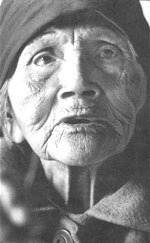 
In keeping with the British legal tradition of defining women as chattels of their husbands or fathers, the Indian Act of 1876 decreed that Aboriginal women who married non-Aboriginals could no longer be defined as Indians, and they automatically lost their band memberships. Their children were also deemed "non-status." In addition, until 1960, Aboriginal women or men who wished to acquire the right to purchase alcohol were also declared "non-status."

In essence, in order to be registered as an Indian in Canada, a person could either be defined as "a male person" or else "the wife or widow of a person who is entitled to be registered." This paternalistic system meant thousands of Aboriginal women, such as Mary Augusta Tappage, lost their Indian status as soon as they were married.

As recounted by Tappage, The Days of Augusta (1973) is a mixture of her prose and poetry, with evocative photos by Robert Keziere, which effectively tell her life story, as edited by Jean E. Speare. One of her stories was also posthumously edited for publication by Speare as The Big Tree and the Little Tree (1986).

Born in 1888 at Soda Creek in the Cariboo, Tappage was the daughter of a Shuswap chief and a Métis woman who had fled the prairies after the defeat of Louis Riel during the Riel Rebellion.

At age four she was placed in a Roman Catholic mission where she was punished for speaking her Shuswap language. After nine years, she was permitted to live with her grandmother until she was married, at age 15, to George Evans whose father was Welsh and whose mother was Shuswap. Declared non-status, she retained her self-sufficient Aboriginal ways, serving other women as a midwife while raising her own children.

The birth of her own first child influenced her choice of vocation. In The Days of Augusta, she recalls, "I was out feeding the cattle when I felt my first pain. Well, I kept on feeding the cattle, feeding the calves... I was still sick. When that was over I came back to the house. I had to chop my own wood. Well, I finally fixed my bed and I was getting ready. I made a big fire and I opened the oven so it would be warm in the house.

"I kept getting worse and worse. Finally my daughter was born. All alone, I got up and fixed her up... I had to clean myself up... Made some more fire. Well, I was there for three days in bed and I got up. Well, in the meantime my husband came home. He had been on a spree for three days and came back drunk."

When George Evans died, she decided not to re-marry.

"Once is enough," she said.

As described in her memoir, Tappage made her own clothes, shared her grandmother's stories, delivered babies, attended church and raised several homeless children.

On International Women's Day, in March of 1984, federal Indian Affairs Minister John Munro announced legislation that would enable Aboriginal women to regain their lost status. Not without its paternalistic trappings, this Bill C-31 would enable Indian bands, generally controlled by men, to determine which women could be reinstated as status Indians. Bill C-31 received its royal assent on June 28, 1985, and directly affected some 16,000 Canadian Aboriginal women and their approximately 50,000 children.

The first woman to be reinstated as an Indian in Canada was Mary Two-Axe Early on the Caughnawaga Reserve in Quebec. At age 73, she had been leading the struggle for reinstatement for 20 years. Mary Augusta Tappage did not live long enough to regain her status as an Indian.