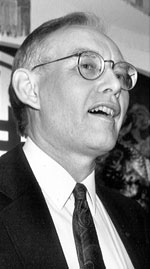 
Born in Saskatchewan and raised in Kamloops, UBC political scientist Paul Tennant received the Haig-Brown Prize and the Lieutenant Governor's Medal for B.C. history for Aboriginal Peoples and Politics: The Indian Land Question in British Columbia, 1849-1989 (UBC Press, 1990), the first comprehensive treatment of Aboriginal land claims in B.C. Tennant travelled throughout B.C., interviewing Aboriginal leaders, attending meetings and examining documents, before writing his critical study. He concludes that Governor James Douglas was largely responsible for much of the current problems pertaining to land claims. Tennant has an M.A. and Ph.D. from the University of Chicago as a Woodrow Wilson National Fellow. He also spent one year in the United States Congress as the first Canadian to hold a Congressional Fellowship. Tennant began teaching at the University of British Columbia in 1966.


Review of the author's work by BC Studies:
Aboriginal Peoples and Politics: The Indian Land Question in British Columbia