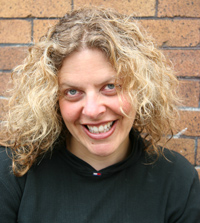 
The Butcher of Penetang by Betsy Trumpener (Caitlin Press $17.95) was nominated for the 2009 Danuta Gleed Award given annually to a Canadian writer for the best first collection of published short fiction in the English language. It was first reviewed in B.C. BookWorld by Cherie Thiessen in 2008:

Articles: 1 Article for this author
The Butcher of Penetang
Review


Are you up for meeting hunters with hearts of gold and the souls of children in a story called "A Slip of the Tongue";? Or a toddler who cracks eggs on the family dog's snout in a story called "Even a Blind Hen";? Or the youth group leader who likes to show young girls his porn magazines at the Bible camp's sleepover in "Instructions for Altar Boys";? Or Keith at the Good Shepherd Day Centre, who thinks a wet teabag is his testicle and who later is picked up for trying to rob a bank with his wife's hairbrush in "Satan's House";?

I like the sheer wackiness of Betsy Trumpener's style and her courage in trying it on.

You can tell Trumpener of Prince George is a CBC reporter. The Butcher of Penetang is a good choice for a title story, and the 40 narrative snippets that comprise this fiction collection flash by as quickly as the clips from a news broadcast.

Some stories are further divided into sub-chapters, and details can be sparse, so the reader has lots of work, occasionally having to provide endings, too.

Frankly, I hate it when a writer does that. I want to know what happened to that missing child in "Search Party."; But, like a good, impartial reporter, the author generally keeps her own point and conclusions from being overt.

We're never quite sure, for instance, in the title story, how she feels toward Gabe when he leaves her on the butcher's table....

In the last story, "Zap Valley,"; while the narrator is seriously ill in hospital, and her friend is having sex with the wrong boyfriend, and the narrator is about to be abandoned by them both, what's her attitude?

Some of the writing is quite simply arresting: "The night the villagers burned each other in effigy was the night Wolfgang fell in love,"; she writes in "Burning in Salango on Saturday Night.";
Or this sentence from "Where It Hurts,"; "Once, I looked out the streetcar window and saw a man flying through the air.";

But mostly the writer presents the facts and then lets you decide how you feel.

Many of the stories are written in the second person, so there's an extra assignment for the reader-to discern who the mysterious 'you' is. All yous are not created equal.

Sometimes they change gender. Frequently they appear to be the writer herself, as in "Elk Canyon Bugler Seeks Junior Reporter."; Or, to ensure you do your homework, the point of view even shifts in the middle of the story in "Emergencies.";

Just when you may be getting over-zapped with the style, along comes a story like "The Coffin Maker,"; veering off course with its zany, surreal black humour.

So is the Butcher of Penetang worth the effort? I expect different readers will respond differently. It's a personal thing; not everyone likes his or her 'meat' miniscule and bloody.
This is a skinny book, divided into four sections entitled, "A Slip of the Tongue,"; "Even a Blind Hen,"; "All the Child I Ever Had"; and "Zap Valley.";
Like a skilled butcher, Trumpener chops and saws through sinew, bone and cartilage, in order to serve up the best cuts. The liver gets saved for a special treat at the end.

This is Trumpener's first book, but her writing has been recognized in publications that include the Malahat Review, Douglas College's Event, The Globe and Mail, and the Guardian.