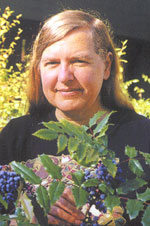 
In 1913, when a rock slide impeded the Fraser River during the construction of the Canadian Northern Railway, the Nlaka'pmx erected a wooden flume, dipnetted the salmon, and then carried them to the flume so they might continue their migrations. The sometimes superior approach of Aboriginal people to nature is reflected in stories collected by Nancy J. Turner's for The Earth's Blanket: Traditional Teachings for Sustainable Living (2005). The title is derived from a report by James Teit who recorded the belief among Nlaka'pmx (Thompson) people that flowers, plants and grasses are the blanket of the earth. From the Saanich comes the story of Pitch, who went fishing in the sun, melted and was poured over the body of the Douglas Fir. From the Nuxult comes the story of Raven bringing soapberries to the Bella Coola Valley. From the Nlaka'pmx comes the story of Old-One who created the Sun, Stars, Moon and Earth. Turner credits dozens of Aboriginal informants from around the province for her sources.

Born in 1947, Nancy J. Turner has collaborated on numerous identification and historical guides to Aboriginal plant use in British Columbia, specializing in the Nlaka'pmx who used at least 350 species of plants for food, medicines and materials. Partially as a tribute to Florence Davidson and other elders, Turner also completed Plants of Haida Gwaii (Sono Nis, 2004), an ethnobotanical study of the Queen Charlotte Islands that examines the uses and importance to the Haida of more than 150 species of plants. It's a project Turner began with her first visit to Haida Gwaii in the early 1970s with historian Robert D. Turner, her husband. Some of Nancy Turner's information on plants was gleaned directly from the late Florence Davidson, who invited her to attend her 95th birthday celebrations. Florence Davidson is depicted on the cover of Plants of Haida Gwaii in a photograph taken by Robert D. Turner showing her removing cedar bark from a red cedar in preparation for weaving. Florence Davidson died in Masset in December of 1993. The Lieutenant Governor's Award for top prize from the 22nd annual BC Historical Federation Book Prizes competition was presented in Kelowna to Nancy Turner for Plants of the Haida Gwaii. The venerable award is not to be confused with Lieutenant Governor's Award for Literary Excellence, first presented in 2004.

After more than forty years and thirteen books in the field of ethnobotany, Nancy J. Turner has provided a cumulative, two-volume, tour-de-force -- a big book with a big title -- Ethnobotany and Ecological Wisdom of Indigenous Peoples of Northwestern North America (McGill-Queen's University Press $100) to describe the cultural importance and methodologies of plant use by indigenous peoples of the Pacific Northwest. Her "magisterial work," according to Thomas F. Thornton of Oxford's Environmental Change Institute both challenges and contributes to existing knowledge of First Nations cultures and ecological systems. Whereas Volume 1 presents an historical overview of ethnobotanical knowledge before and after European contact, volume 2 delves into how systems were developed for cultivation and harvesting, exploring the interaction between plants and peoples, including how those relations are expressed in stories and narratives.

In 2015, FranÃ§ois Trahan won the Ewart-Daveluy Indexing Award, honouring his indexing of Turner's Ancient Pathways, Ancestral Knowledge. Trahan worked closely with Turner to understand cross-cultural contexts and meanings. Even an aspect such as alphabetization became complex because of the diacritics and other special characters that form part of the spellings of the many First Nation words and phrases in the text. The judges of the Indexing Award concluded the result of the collaboration is a respectful, comprehensive and engaging subject index.

Nancy Turner and Richard Hebda present the results of many years of working with botanical experts from the Saanich Nation on southern Vancouver Island. Elders Violet Williams of Pauquachin, Elsie Claxton of Tsawout, and Christopher Paul and Dave Elliott of Tsartlip pass on their knowledge of plants and their uses to future generations of Saanich and Coast Salish people, and to anyone interested in native plants and their uses.

Saanich Ethnobotany includes detailed information about the plants that were traditionally harvested to use in all aspects of Saanich life, such as for food and medicines, and to make tools, buildings and weapons. Each plant is listed by its common (English), scientific and Saanich names. Each listing contains a brief botanical description with a colour photograph, where to find the plant and how it was used traditionally by the Saanich people.

This important book celebrates the richness and tremendous value of locally based knowledge in a rapidly changing world.

Dr Nancy J. Turner is Distinguished and Hakai Professor in Ethnoecology in the School of Environmental Studies at the University of Victoria. She has published several books and numerous articles on ethnobotany and First Nations issues. She has received numerous awards for her work and is a member of the Order of Canada and the Order of British Columbia.

Dr Richard J. Hebda is Curator of Earth History and Botany at the Royal BC Museum and Adjunct Professor in the Department of Biology and School of Earth and Ocean Sciences at the University of Victoria. He has written hundreds of articles and several books on BC's plants and ice-age history.


Having studied Indigenous peoples' knowledge of plants and environ-
ments for over forty years, Nancy J. Turner has published Ancient Pathways, Ancestral Knowledge: Ethnobotany and Ecological Wisdom of Indigenous Peoples of Northwestern North America (McGill-Queen's University Press $100). Turner shows Indigenous peoples' complex understanding of plant resources as she follows them over time demonstrating how they actively cultivated plant resources for thousands of years, as well as how knowledge was passed on from generation to generation and from one community to another. 9780773543805

In this colossal work, Turner, a professor of ethnoecology at the University of Victoria, combines ethnobotany, comparative linguistics, and anthropology. She has spanned disciplines and geography to create a compelling account of the interchange not only of different indigenous groups in their horticultural practices, but also in their linguistic and belief structures to reveal the complexities of these societies in their ecological relations. The first of two volumes establishes the evolving ecological contexts, from the Pleistocene to the present. It identifies staples, principal cultivars, and the development of technologies responsible for their husbandry and use with fascinating examples such as the disciplined cultivation of tidal marsh and estuary flats and the important archaeological find of an ancient wapato potato garden. These considerations are framed by an analysis of linguistic considerations that are testament to shared experiences, economic relations and the transmission of learning. This last theme is picked up and intensified in Volume 2, in which belief systems, cultural narratives, and worldviews are considered in relation to ecologically lived-experience as having the power of continued relevance to inform contemporary attitudes and sensibilities. (July)
BCBW 2014