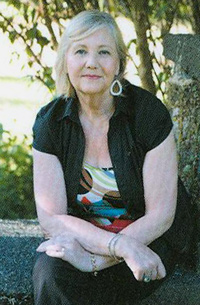 
After graduating as a mature student with a BA in English from SFU, Monika Sonya Ullmann of Victoria worked as a book editor for Commcept Publishing, edited one issue of EVENT Magazine, worked in the high tech sector for some years, taught ESL and Driving, and turned to full-time writing in the late nineties. Her first book, The Life and Art of David Marshall (Mother Tongue 2008), resurrects the reputation of sculptor David Marshall.

Her follow-up is a self-published novel, City of Desire (Victoria: ProWord $20), set largely in Vancouver, but with global concerns. After a devastating underwater quake and a tsunami turn Vancouver into rubble, two art students, half Chinese Athena and her best friend, Aboriginal Moira, are galvanized into action With a pet crow, they make an epic journey to the Tar Sand and start to inspire their generation to rebuild for a smarter future that considers climate change. "Expecting scientists to do the science and also tell the story of Climate Change is too much to expect," says Ullman. "The storytellers have to take this on so people can engage on an emotional level with the most important issue of our time.";

The Life and Art of David Marshall (Mother Tongue Publishing, 2008)

Articles: 2 Articles for this author
The Life and Art of David Marshall
Publisher's Promo (2009)


Part biography, part art history and part art commentary and first in the new series: The Unheralded Artists of BC, this book tells the story of a prodigious sculptor whose artistic legacy is known to only a few collectors, fellow sculptors and curators. Illustrated throughout with rare colour photographs, the lively, wide ranging text is based on original interviews, letters and diaries and explores the reasons both sociopolitical and contemporary of why Marshall has been neglected as an artist in his own city. A resident of Vancouver from his early twenties on, Marshall was admired as a master carver but also worked extensively in bronze. At a time when conceptual and installation art dominated, he worked in the modernist tradition he shared with his friend, Henry Moore, who was one of many influences. His work is based on universal and timeless principles of harmony and remains one of the great treasures waiting to be discovered by the Canadian art world and the general public. He was a founding member of the Sculptors' Society of British Columbia. He died in 2006.

MONIKA ULLMANN: After earning a BA in English from SFU in 1978, Monika worked as house editor for CommCept Publishing. Married to sculptor Peter Paul Ochs, she wrote for the Sculptors' Society of B.C. and curated The Age of Bronze exhibition at Images for a Vancouver Gallery. After several years in the high tech industry she became a freelance journalist, writing features on the arts, health and tourism for magazines and newspapers in Vancouver.

BROOKS JOYNER, who contributes the foreword, is the Director of the Joslyn Art Museum in Omaha Nebraska. He was the Director of the Vancouver Art Gallery in BC, 1993-1996. He has more than twenty-five years of academic, curatorial and administrative experience in art museums and art history.

David's body of work; the legacy of an entire lifetime of obsessive devotion to his Muse, is in danger of becoming famous for being mired in lawsuits instead of its genius. This makes me sad. As his Biographer and friend, I wish that he had listened to George Drake, a lifelong friend and supporter, who offered a coherent plan to establish his name in the international art world where David's art belongs. David refused and died without a plan. It has proved to be a serious mistake, as I predicted in my biography, The Life and Art of David Marshall (Mother Tongue Publishing, 2008)

David was an Internationalist, in style and vision. His work should not be tucked away in a tiny provincial gallery in Gastown and characterized as 'BC Sculpture'. It is much more than that. David was a sculptor who worked in a late modernist tradition that is international in scope. Why anyone would want to diminish him to a 'local' scale baffles me. It does him a disservice. At the very least, he deserves a global platform, and Drake's website, www.davidmarshallsculptor.com and its controversial contents certainly does that. I hope it's not too late to make David Franklin Marshall's legacy available to a wider audience. This is an enormous task, and I salute George Drake for tackling it-again.

Meanwhile, the legal wrangling is ongoing. Carel Marshall, David's widow, was prevailed upon to give power of attorney to the daughter of old family friend, Catriona Hearn, who in turn, decided to 'give' Marshall 's artistic legacy to the owner of the Trench Gallery in Gastown, one Craig Sibley. He in turn sent a letter in September 2012, ordering Drake to 'cease and desist' any and all attempts to promote David's work. Drake's attempts to exhibit some of the first concrete pieces David cast during the fifties, in Bellingham's Big Rock Garden Park along with sculptures of all David's contemporaries in a tribute to his lifelong friend, was thus denied. To add insult to injury, the letter accused Drake that "What we are seeing from you and in your proposals is an imposition of American values on Canadian Art and thus counter to David's life and philosophy";. I can hear David chuckling up there in his carving heaven; this kind of provincialism was so NOT what he was about, it's simply laughable.

Artists who leave a legacy without making specific arrangements might want to learn from the Marshall story. Marshall's failure to think ahead might have had something to do with his distaste for the commercial aspects of the art world and his assessment that art didn't have a place in Canadian culture. In this, he was certainly not alone. Starving or thriving; Artists in Canada have long felt that the average citizen regards art and artists as something a bit alien and hard to place. Unlike Hockey and shopping, the visual arts struggle with the perception that they are an elitist enterprise at best and an incomprehensible fraud at worst. When your own Prime Minister believes that artists are a bunch of people who hang around cocktail parties, and therefore do not deserve any special support, where does that leave the entire enterprise of art in Canada? In a political and cultural no man's land, that's where.

David Marshall wanted to change all that, and not surprisingly, he failed. At the beginning as well as at the end of his life, he bemoaned the fact that nothing had changed in the status of the artist during his lifetime. Canadians were as uninterested as always, especially average working people. These were the people that David identified with; he considered himself 'a working stiff', and I doubt that he ever attended a cocktail party in his entire life. His dream was to make art part of the fabric of Canadian life. In fact, I would argue that his ideal was the role that arts and creativity plays in tribal societies such as the Inuit whose works he so admired and also collected. He wanted Canadians to be more like the Inuit: to use their artistic talents to collect as well as make art and to fight against the commodification of art in general. It was a conundrum he never resolved and even while he sold some expensive works, he remained deeply conflicted about making a living as an artist.

For him, art was a personal vision based on universal principles, an expression of life, of hard earned skills, of dreams. It was definitely not just an economic enterprise though even the Inuit carved for the market to the south and came to rely on that income. His life long aversion to the art market, and its modern excesses is not unique. I have yet to meet an artist who doesn't feel this way, at least some of the time.

However, Marshall's refusal or inability to deal with the commercial aspects of his legacy before his death has unleashed a cascade of events that is ongoing and described on this website in detail. His widow Carel's inability to deal with the enormous task of finding a permanent home for the collection has made her a target for apparent abuse and certainly, exploitation. It is ironic that David's work, the epitome of classical proportion and harmony, is causing so much strife. The takeaway here is certainly this: if you're going to leave a large body of work, make sure it has a home before you die. And barring that, find your own version of George Drake to take care of it.