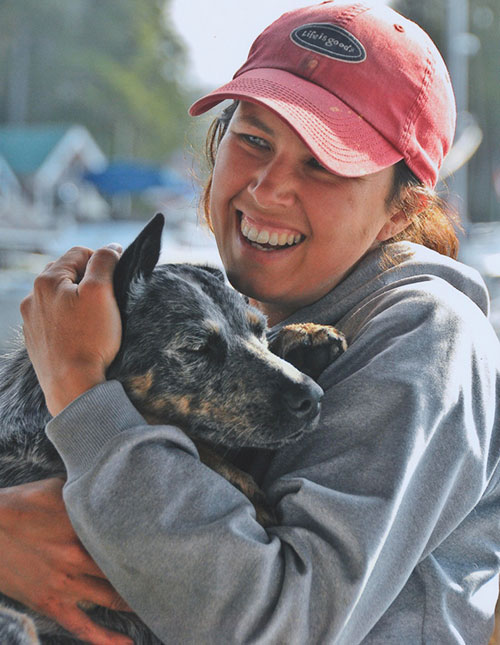 
"I took off my shoes and left my life behind and stepped into the unknown," says Nikki van Schyndel. Having long imagined subsisting in the wilderness, she took some survival courses, graduated from the Dominion Herbal College in British Columbia, and spent a year-and-a-half on an island in the Broughton archipelago, initially surviving on grubs and mice, then snails, mussells and seaweed. Taking refuge in an abandoned cabin with a male companion, Micah, and a dog named Cricket, she became an expert outdoorswoman, making her own cedar bark clothing and fish hooks, and learning to live off the land. Now living in Echo Bay where she works as a wilderness tour operator for Echo Bay EcoVentures, van Schyndel has written a memoir about her nineteen months of West Coast survivalism, Living Wild: Living the Primitive Life on a West Coast Island (Caitlin 2014). Having slept in a garbage stuffed with leaves to escape hypothermia, she took what nature provided and soon learned not to be squeamish. "In Roman times," she says, "people fattened up mice in jars before they ate them and actually they taste okay. Eaten whole, they provide a lot of nutrition for the survivalist."

Review of the author's work by BC Studies:
Becoming Wild: Living the Primitive Life on the West Coast Island