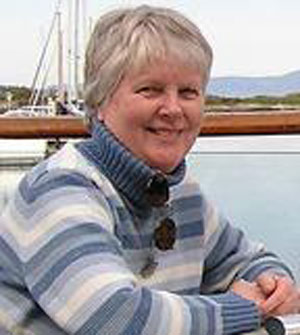 Place of residence: Victoria, BC

Arrival in BC: Twice served with the Royal Canadian Navy at HMCS Naden, now CFB Esquimalt, in the 1950s. Retired to Victoria in 2002.

Ancestral background: French Canadian and Scottish Canadian going back to the 1700s. A Scottish ancestor, John Maxwell, served with General Wolfe at the Battle of the Plains of Abraham in 1759.

"You are going to London, and you are going to work for The Queen."; With these words, Petty Officer Rosalee Auger (van Stelten) was jettisoned from HMCS Naden in Esquimalt, BC to the Royal Household in Buckingham Palace and service aboard HMY Britannia during the 1959 Royal Tour of Canada. The only female Yottie in Britannia's history, she is a lifetime member of the Association of Royal Yachtsmen.

Among her adventures while Lady Clerk to the Assistant Press Secretary to The Queen was a resounding collision with the Cadillac belonging to the late Shah of Iran. Fortunately, the media never got wind of the mishap. Also fortunately, both the Shah's chauffeur and The Queen's petty officer had diplomatic immunity. Even more fortunately, His Imperial Majesty Arymehr Shahanshaw Mohammad Reza Pahlavi was not in the vehicle at the time of the incident. This, and her many other escapades, are related in WREN: memories of navy days/from royal yacht to quonset hut (Private publication, 2010, $16.95) along with more serious issues of the Cold War.

Van Stelten's working life has taken her from the Atlantic to the Pacific Oceans and from palace to quonset hut to cattle ranch. A widely published free-lance writer, she began her literary career in her mid-forties, first specializing in stories, radio dramas and articles for young people. When her poem "The Last Dinosaur"; was accepted for the anthology Do Whales Jump at Night? and almost simultaneously "The Cancelled Canadian"; was published in Barbed Lyres, a book of satirical verse edited by Margaret Atwood, she had found her calling. She is a member of the League of Canadian Poets.

Born in Thunder Bay, raised in Winnipeg, and a Calgarian for many years Van Stelten twice served with the Royal Canadian Navy at HMCS Naden, Esquimalt in the 1950s. In 2002, she retired to Victoria.

Calgary Stampede Foundation, White Stetson award, 2009. Presented at the world premiere of "The Three Sisters,"; a concert piece for wind band and orchestra, composed by Kelly- Marie Murphy, inspired by Rosalee van Stelten's eponymous poem which forms an integral part of the work.

The Three Sisters a concert piece for wind band and narrator, is featured in the Calgary Stampede Showband CD Breaking Boundaries. Composed by Kelly-Marie Murphy, it was inspired by Rosalee van Stelten's eponymous poem which forms an integral part of the work, and premiered at the Calgary Centre for the Performing Arts in 2009. The poem also appears in her Frontenac House book Pattern of Genes.";

"Van Stelten has a wonderful way of weaving together story, place and language. One is quickly drawn into her poems and always rewarded."; Hazel Hutchins, author of After.

Van Stelten's verse is both visually driven, concentrating on the observable, and possessed of a solid aural foundation.... The better poems in this collection combine these two virtues to paint exquisite miniatures. - Alexander Rettie, Alberta Views

The virtue and reward (are) in the dexterous, imagistic strokes, the economy of means. Van Stelten knows how to turn a line and to rein in the syllables or loosen the lope of phrase and image as they uncoil down her page. - Richard Stevenson, The Danforth Review