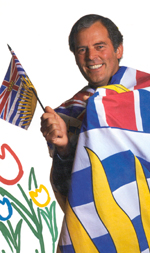 
Ex-Premier of B.C., Bill Vander Zalm was born into a family of Dutch bulb merchants in 1934. His father was in the Fraser Valley for most of WW II while the family remained in the Catholic village of Noordwykerhout, which was occupied by the Nazis. After the war Vander Zalm joined his father in Bradner and took over his father's sales calls around B.C. at age 17. He bought Art Knapp's Nurseries Ltd. for $3,200 when there was no store. He was never the sole owner of the chain of Art Knapp stores that developed, as the media erroneously reported for years. Vander Zalm's month-by-month guide, Northwest Gardener's Almanac, has had numerous printings.

Alan Twigg published the first critical book on Vander Zalm, a biography called Vander Zalm: From Immigrant to Premier (Harbour Publishing, 1986). The 28th Premier of British Columbia self-published his own 615-page autobiography Bill Vander Zalm "For The People" (2008 $39.95 plus tax and shipping) available via his internet site. It was followed by a 180-page softcover on his remarkable and ultimately successful fight to rid B.C. of an unpopular tax, HST & the People for Democracy (Red Tuque Distribution 2013 $20 978-0-9921415-0-9), ";dedicated to over 705,000 British Columbians that signed the HST Initiative Petition."; Both were available from his website but were handled via Red Tuque Books as of November, 2013).

[Cover image from Fantasyland by Gary Mason and Keith Baldrey]

Articles: 2 Articles for this author
The Tulip King and the Fool (D&M $14.95)
Article


ALTHOUGH PREMIER BILL VANDER Zalm's popularity may fluctuate at the polls, it remains steady with the printers. Three books already available about Vander Zalm apparently aren't enough. A fourth will be Terry Morley's satire, The Tulip King and the Fool (D&M $14.95). A fifth due this fall will be a collaborative effort from the Vancouver Sun team of Keith Baldrey and Gary Mason, Fantasyland: Inside the Merry Reign of Bill Vander Zalm. A sixth Zalm-related book will be Stan Persky's Fantasy Government from New Star Books. The company will also publish a collection of Zalm-related political cartoons.


CHAIRMAN MAO'S LITTLE RED BOOK IS old hat. Quotations from Chairman Zalm (Pulp $4.95) is a new, 100 page stocking stuffer containing 20 years of wisdom from The Man Who Would Be Sinterklaas. "Large numbers of intellectuals have confessed themselves unable to approach Zalm Thought with any degree of self-confidence," write the tongue-in-cheek, editors Steve Osborne and Mary Schendlinger. "Dismayed by the seemingly opaque, daunted by the apparently surreal, they retreat from Zalm Thought as they do from the koan and the haiku.";Let them be reassured, however, let them calm themselves. All the complexities of Zalm Thought form a simple whole, and must be approached with an open mind and a quiet spirit. It is a way of seeing into the world." No word yet whether the Premier Bill Vander Zalm will demand his own share of the royalties