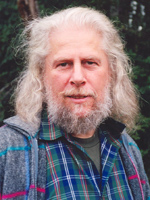 
Ed Varney has been a fervent promoter of Canadian poets and artists and has worked to find contexts for poetry and art outside the usual established and academic arenas.

Born in New Rochelle, New York, Ed Varney received his BA and MA from Syracuse University where he studied with poets Delmore Schwartz and Donald Justice and printmaker Robert Marx. He came to Vancouver as a draft evader in 1968. In Vancouver, he joined the multimedia artists' collaborative group Intermedia and founded Intermedia Press in 1969 as its publishing arm. He was one of the founding members of the Association of Canadian Publishers and the Literary Press Group. In 1971, he joined forces with poet Henry Rappaport and, between 1969 and 1981, Intermedia Press published 55 books of poetry and 50 novels, short story collections, anthologies and trade books. Intermedia Press played a significant part in the explosion of interest in Canadian Literature in the 1970s, publishing poets such as Beth Jankola, Tim Lander, Stanley Cooperman, Pat Lowther, Mona Fertig, Judith Copithorne, bill bissett, Rikki Ducornet, Cathy Ford, Nellie McClung, Avron Hoffman and Maxine Gadd. Varney was also founding editor of the Poem Company (1970-1974), a member of the Vancouver Poetry Front (1970-1971), one of Canada's earliest collaborative poetry performance groups, and the founder of the Intermedia Video Band (1970-1972). His interest in sound and concrete poetry led him to explore various and innovative approaches to the visual presentation of poetry which found a receptive audience in South America and Europe. His work has appeared in numerous magazines and exhibitions.

As an author, Varney has published Openings (Intermedia 1969), a portfolio of poems and prints; Summer Songs (Midnite Press, 1971), more poetry; and Human Nature (Intermedia, 1974) a collection of poetry, graphics and concrete poetry. He became involved in trading poetry and visual art through the mail with other artists and poets and was one of the first generation of Mail Artists, a world wide correspondence network of artists and writers who have used the postal system as a mode of communication and exchange--foreshadowing the internet by two decades. In 1973, he was given an 1896 pin hole perforating machine and he began what has been a lifelong fascination with artistamps, producing well over a hundred different editions.

He was the founder of the Vancouver Poetry Co-op (1973-1975), a member of the Vancouver Poetry Quartet (1977-1978) and the Vancouver Surrealist Group (1979-1993). In 1980, his second wife Dorothy died, leaving him with five children. In the 1980s, he continued to publish work in small magazines and to exhibit his work in venues around the world. He became increasingly involved in the visual arts, serving on the organizing committee of Artropolis (1984-2003), and on the board of numerous art galleries and arts organizations. He was a founding editor of Bite poetry magazine (1985-1988) and in 1991, he and Carolyn Zonailo founded the Poem Factory (1991-2003). In the early 1990s, he published a substantial collection of poetry titled What the Wind Said (Caitlin, 1991) and since then has produced several chapbooks, numerous essays, art catalogue essays, and reviews as well as seeing his visual art appear in over 300 exhibitions in 35 countries.

In the 1990s, Varney became interested in public art and was the manager of several public art projects in Vancouver. He served on various committees with the City of Vancouver and the Parks Board, including the organizing committee of the Roundhouse, and was a member of its first board of directors. He has been a research fellow at the Specific Research Institute and a consultant for the Museo Internacionale de Neu Art and continues to serve on the boards of several organizations and societies. Varney's own poetry is marked by philosophical surrealism, twisted and stretched syntax, and is scattered with aphorisms and epigrams. His underlying theme is exploration of moments of natural mysticism and charged emotion within everyday existence. His visual art is full of visual conundrums and tricks, fooling the eye and the mind.

Based in Royston on Vancouver Island, Varney has continued to write, print and sell "strange and beautiful handmade books for advanced readers"; from out of Courtenay, including Perro Verlag's alluring The Book of Nada, a petite philosophical treatise that Varney initially described as being found in his archives dating back to the early 1970s. He later revealed he had written it in the Seventies and updated it for publication under a pseudonym. "I ascribed it to an unknown author because I thought that was an amusing frame to put around it. Apparently everyone fell for it. If you are interested, I have a manuscript of the Diaries of Adolf Hitler...."