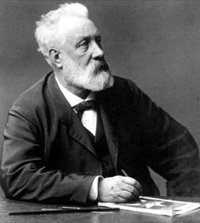 
Often considered one of the two fathers of science fiction along with H.G. Wells, Jules Verne, aka "the most translated author in the world,"; gave the world Journey to the Center of the Earth, Twenty Thousand Leagues under the Sea and Around the World in Eighty Days. Few know he also wrote a cautionary tale set in B.C. and the Yukon.

Verne's protagonists in The Golden Volcano (University of Nebraska Press $15.95 U.S.) are two naÃ¯ve Canadian cousins, Ben Raddle and Summy Skim, who have been bequeathed a mining claim in the Klondike. After they travel across Canada by train and spend one of the opening chapters in Vancouver, they take a ship to Skagway and seek their fortunes via the deadly Chilkoot Pass.

The completed manuscript for The Golden Volcano was one of eight unpublished novels that were found after Jules Verne died on March 24, 1905. The author's son Michel Verne re-wrote much of The Golden Volcano to soften his father's dire cynicism about gold-an attitude that Verne developed while working at the Stock Exchange in 1857-and added an insipid fairytale ending.

For about 100 years the novel was mostly dismissed as a lesser work but with the recovery of Verne manuscripts by the SociÃ©tÃ© Jules Verne in France, Edward Baxter has provided a newly translated version of The Golden Volcano, undoing the commercially-motivated tamperings of Verne, Jr.

As well, Jules Verne wrote a novel called Caesar Cacabel in which the opening eight chapters describe an intinerant showman and his family travelling overland from California, trying to reach Russian territory to the north in 1867. They despite the British and which to traverse British Columbia as soon as possible. This novel was translated from the French by A. Estoclet ad published by the Cassell Publishing Company of New York in 1890, will illustrations by George Roux. There is a copy in the B.C. Archives.