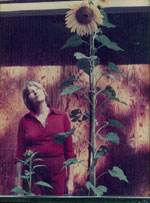 
Lorraine Vernon was born in North Vancouver on September 15, 1921. Her collection of 12 stories entitled Through the Canyon (Ekstasis, 1995) was shortlisted for the Ethel Wilson Fiction Prize in 1996. Two of the most poignant stories portray women with mastectomies, an operation Vernon underwent herself and wrote about in the Vancouver Sun in April of 1991. The title story of her collection concerns a trip through the Fraser Canyon. 'Recollections of a Fried Egg' is a reminiscence about a father. 'Blossoms' concerns two lovers who meet every spring to shake cherry blossoms off trees. In 'Footnotes to the Heart', a 60-year-old woman keeps a diary so that her doctor can monitor her actions in comparison to her erratic heartbeat. In doing so, she discovers she knows little about her internal organs and much more about people, her surroundings, love and 'the plethora of human experience'. In 'The Dry Sea' the allure of monetary spirituality unfolds in the mecca of Las Vegas. "We all carrying assorted silver to purchase salvation," she writes. "Green bills to buy freedom... from arid reality to a better place--one of milk, honey, mirage."

Lorraine Vernon's preceding books were No. 3 Frank Street (poetry), The Flautist of Koln and Mastectomy: An April Journal. As a critic she contributed to Canadian Literature, the Vancouver Sun and the Province. She raised her five children in Vancouver and spent the final years of her life in White Rock where she died on April 21, 2004