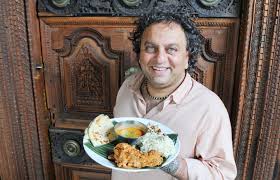 
Born in India, raised in Amritsar and Mumbai, Vikram Vij studied hotel management in Salzburg, Austria before coming to Canada and opening his original 14-seat Vij's restaurant in Vancouver in 1994 with his wife Meeru Dhalwala, born in India but raised in Washington, D.C.


Vancouver, BC. 5 November 2007. It's been an exciting week for the culinary duo Vikram Vij and Meeru Dhalwala as their first recipe book won two prestigious culinary book awards. In just one week Vij's: Elegant and Inspired Indian Cuisine, has been named winner of the Canadian Culinary Book Awards in the English Cookbook category, and has been named winner of the Cordon d'Or Gold Ribbon International Cookbook Award in the International Cookbook category.

The Canadian Culinary Book Awards, sponsored by Cuisine Canada and the University of Guelph, announced the win at their gala reception on November 2nd. The Award Presentation for the Cordon d'Or Gold Ribbon Awards will take place in St. Petersburg, Florida on January 12th 2008.

The lineups are legendary at Vij's restaurant in Vancouver, where Vikram and Meeru use local ingredients and original ideas to create exciting takes on the cuisines of India. Vij's includes vegetarian recipes and a selection of side dishes and accompaniments such as rice pilafs, chapattis (flatbread) and chutneys, and each recipe is accompanied by a suggested wine pairing.

Vij's is also the winner of Barbara Jo's First Annual Cookbook Award, and won 1st place at the Alcuin Awards for Excellence in Book Design in the Reference Category.


Vij's at Home: Relax, Honey (D&M $40), has won Best Indian Cuisine Book in Canada at the 2010 Gourmand International World Cookbook Awards. The awards were inaugurated in 1995 by Edouard Cointreau, to "honour the best food and wine books,"; and are presented in a total of 59 categories, over two rounds. In earning the best in Canada title, Vij's at Home has now qualified to compete in the second stage, for the best in the world prize. Following-up their bestseller , Vij's: Elegant and Inspired Indian Food Meeru Dhalwala and Vikram Vij have shown how to prepare the recipes they eat at home, from vegetarian dishes that go from stove to plate in less than 45 minutes to seafood, poultry and meat dishes that come together in 20 minutes. 9781553655725


They started their first restaurant in 1994, opened a second one ten years later and began writing cookbooks in 2006 published by Douglas & McIntyre. Now, with a new Toronto publisher, Meeru Dhalwala and Vikram Vij (pictured at right) have released a third cookbook, Vij's Indian: Our Stories, Spices and Cherished Recipes (Penguin Random House $35).

In its 7-page introduction Vij's Indian intertwines family food stories with juicy stories about family dynamics. Are Vij and Meeru divorced? It's hard to tell as they continued to share daily family meals in the same house even when Vij moved into a separate apartment. And of course the pair continue to run their restaurant, food business, and cookbook empire together.

Confusing? It was to their daughter Nanaki too, who, upon hearing her father had an apartment even though they would "remain a family";, asked: "Why are you both being so weird? Why can't you do anything like normal parents? Why can't you just say you're splitting up instead of pretending you're not?";

The family continues in the same household although oldest daughter Nanaki has moved to Montreal to attend McGill University. And Meeru spent a month with her ailing mother Omi, who suffered a series of strokes, to get her recipes, some of the "cherished recipes"; in this cookbook.