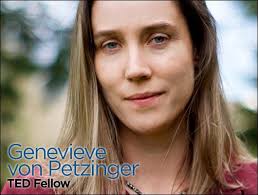 
Victoria-based archaeologist Genevieve Von Petzinger writes about the connections she has found between most of Europe's cave art in The First Signs (Atria Books 2016). She has built a database that holds more than 5,000 signs from 400 sites across Europe of these early indications of symbolic meaning and language.

Her 2015 TED talk, "Why Are These 32 Symbols Found in Ancient Caves All Over Europe?" had over 1.5 million views by the end of 2015. Her work on the subject has also appeared in print, radio, television and web-based features such as New Scientist and the European edition of Science Illustrated.

Articles: 2 Articles for this author
The First Signs: Unlocking the Mysteries of the World’s Oldest Symbols
Article (2016)


Not a lot of B.C. authors are invited to give TED talks. Victoria-based paleoanthropologist Genevieve von Petzinger was the only Canadian invited to speak at the 2011 TEDGlobal Conference in Edinburgh, Scotland. Her TED talk, "Why Are These 32 Symbols Found in Ancient Caves All Over Europe?"; had over 1.5 million views by the end of 2015. Her database contains 5,000 examples of symbolic art from 400 sites across Europe that mark the beginnings of symbolic meaning and language. Von Petzinger has now documented her findings about prehistoric European cave art in The First Signs: Unlocking the Mysteries of the World's Oldest Symbols (Atria Books $36). 9781476785493
BCBW (Summer 2016)

In The First Signs: Unlocking the Mysteries of the World's Oldest Symbols, Genevieve von Petzinger explores the geometric images found in European cave art, shapes such as dots, x's, triangles, parallel lines, and spirals. To her, the discernible patterns reveal abstract thought and expression.

Reviewer Chris Arnett, an expert in the indigenous rock art of the Nlaka'pamux and Salish territories of B.C., counters that the geometric images found in cave art express not a shared symbolic system but the common tactile and physical qualities of rock surfaces.

Rock art -- ancient or more recent images drawn, painted, or carved onto rock surfaces in caves and elsewhere -- has an exciting immediacy for those who view and study it. Unlike a lot of archaeological data, which is sometimes buried or in ruins, rock art is found exactly where its makers intended it to be, often in spectacular locations, allowing us to view it in the same context as the artist who produced it.

Seeing these "pictures in place"; is one thing, but understanding the motivation behind the art is another. In The First Signs: Unlocking the Mysteries of the World's Oldest Symbols, University of Victoria paleoanthropologist Genevieve von Petzinger seeks the intent behind certain forms of Ice Age rock art or, as she prefers to call them, "signs.";

While Ice Age European art is world-famous for its paintings and drawings of extinct megafauna, von Petzinger's study focuses on the lesser known geometric abstract art (dots, lines, circles, etc.) found in the same caves, from which she has created a relational database of motifs.

After tabulating data from 368 European sites across a time span of 38,000 years - extending from 48,000 to 10,000 B.P [Before Present] -- she claims to have identified 32 distinct signs used consistently through this long period. She assumes that the conformity and continuity of "a limited number of geometric signs used across time and space"; (164) demonstrates that "our ancient ancestors had to have had a system in place. And the way to comprehend that system was through the patterns"; (163) -- hence her spatial and temporal study of geometric signs.

To find the patterns of this "system,"; von Petzinger intersperses informative discussions of archaeology, rock art technique, and communication theory with engaging first person accounts of visits to actual sites in Portugal, France, Sicily, and Spain, with her photographer husband, Dillon von Petzinger.

Von Petzinger traces the origins of symbolic behaviour from the beginning of our species in Africa until the end of the European Ice Age around 10,000 years ago. She explains the evolution of symbolic behaviour manifest in art, burial rites, and the use of red ochre. She examines the literature, gives masterly descriptions of sites and rock art techniques, offers her own and others' interpretations, but proposes no final solution save that the imagery was some means of graphic communication.

The question she finds most interesting is the link between these ancient markings and the writing systems of today. Unfortunately, she overlooks some important work on this subject, including the classic North America-wide study by Garrick Mallory (1893), the work of German rock art researcher Herbert Kuhn (1956), and the contribution of by B.C. anthropologist Richard Daly (1993).

In her travels and discussion of the meaning of rock art, von Petzinger describes various interpretations, ranging from the hunting magic hypothesis (which, while discredited, keeps coming up), to mnemonics, and even to rock art as writing (which, she says, it's not).

She is cautious, as are other European paleoarchaeologists, of the role of "shamanism"; in rock art, particularly the idea that people went into caves, hallucinated, and then projected their visions onto the rock surface and fixed them with paint.

The First Signs is an engaging book and a record of an intriguing quest(ion). I recommend it as a "go to"; book for the initiate looking for a sense of European Ice Age rock art studies.

The book is not without weaknesses. Charts showing her data would have been valuable. Von Petzinger employs interpretative interjections a bit too freely and without explanation. For example, she asserts that "there may have been a widespread tradition of using abstract configurations as some sort of identity or ownership mark to let others know if a cave was 'taken'"; (160). Such statements might have been tailored to the book's intended audience: an interested public rather than solely an academic readership.

Readers should also be mindful of the book's theoretical foundation. The First Signs employs a cultural evolutionary processual approach that relies on selective empirical data. It does not include taphonomy (selective survival) or cultural variation. Taphonomy, or more properly taphonomic logic (Bednarik, 1994) suggests the statistical unlikelihood of any material cultural patterning over a span of 38,000 years. The imagery of Ice Age rock art is therefore a very skewed fraction of "what was,"; rendering a statistical analysis almost meaningless.

Abundant data on cultural variation is available in the ethnographic literature, but apart from von Petzinger's infrequent generalizations about hunter-gatherers, this rich ethnographic database of rock art symbolism is little accessed in her writing. Along with other rock art specialists, she often speculates about abstract designs, for example seeing them as maps, because that is what they look like to us, but why would the indigenous people of Europe require maps? Surely, like indigenous people everywhere, they would be intimately familiar with their landscapes and have no need for maps, especially when in remote areas or deep underground?

Indeed, indigenous theory on rock art points us in a different interpretative direction. A natural response in western culture is to overlook a fundamental part of rock art, namely its interaction with the rock surface. Stand in front of a rock painting and have a look at what the artist saw before the painting: cracks, hollows, textures, and areas of white mineral precipitate.

These and other features took on a significance beyond our imagination, but they were of utmost importance to the artists, who replicated the features with lines or dots or incorporated them into the final designs. Westerners think of rocks and caves as inert objects, as a canvas, but indigenous cultures saw and see them as social entities.

A quick perusal of any of the photographs in The First Signs shows the relationship between the paintings and engravings and features in the rock surface, which themselves form geometric shapes. So-called "Spanish Tectiforms"; lose some of their design mystery once you notice that they mimic similar cracks and features in the rock surface. Lines and dots along cracks are there because of the rock features. Only once (233-234) does von Petzinger point out that natural rock features have any influence on design.

Ice age rock art seems to float in space only to those who aren't paying close attention to the rock surface, which is why the painter was there in the first place.

Place is always prior to the paintings. This awareness suggests a different worldview requiring a theoretical framework based on ethnographic analogies. The paintings, or signs, do not exist alone as symbols and may not communicate anything other than the activity itself: the marking of a specific rock surface with paint.

Von Petzingers's work would benefit from closer attention to world rock art and ethnographic realities. She makes such a connection only once, when she compares South African with Australian examples to make the case for the arbitrariness of designs (224-225).

But if she had extended her database another 10,000 years -- after all, what's a few millennia when you're talking scores of thousands of years of world history? -- she would have found a wealth of indigenous (culturally grounded) geometric and abstract rock art right here in B.C. (and elsewhere) bearing the symbolic analogies that she seeks to articulate.

For example, indigenous rock art found in the Nlaka'pamux territories of B.C. has at least 23 of the 32 conventional designs identified in The First Signs. Of course, the context and meaning of signs in Nlaka'pamux rock art is most likely different than those of Ice Age Europe but, as with the abstract art of many cultures, the Nlaka'pamux examples provide good illustrations of signs with symbolic meanings. And, as von Petzinger points out following linguistic analogy, meanings are conventional but also arbitrary.

My work in the Salish territories has shown that rock art is most often the result of a direct interaction between the painter and the rock surface. The painter made images and lines along cracks, dots along fissures, and other accommodations of paint and tools to the rock surface. The uniformity of rock art designs (lines, angles, dots, etc.) over tens of thousand of years may have had less to do with a shared symbolic system than a similar tactile attention to rock surfaces worldwide. Thus rock art is a communication or collaboration between the person and the place. Homo sapiens need not apply.

Von Petzinger is not unfamiliar with this idea and states it eloquently as something central to her work:

The question I'm really trying to get at is the level of intent... [the rock artists were] fully modern people living in a cultural world overlaying the natural one. Just as we do, they interacted with these two worlds through a symbolic framework. In many ways the rock art can be seen as the ultimate end product of this new way of perceiving being in the world (115).

If Von Petzinger paid more attention to the interaction of people with nature, which is literally embodied in the rock surfaces, she could move beyond the evolutionary paradigm to locate the pattern she seeks and consider these the signs of all times.

Daly, Richard. 1993. "Writing on the Landscape: Protoliteracy and Psychic Travel in Oral Cultures,"; in Annie York, Richard Daly and Chris Arnett, They Write Their Dreams on the Rock Forever: Rock Writings of the Stein River Valley, British Columbia. Vancouver: Talonbooks, 223-260.

Mallory, Garrick. 1893. "Picture Writing of the American Indians,"; in Tenth Annual Report of the Bureau of American Ethnology to the Secretary of the Smithsonian Institution. Washington, DC.