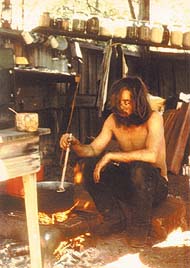 
The son of novelist Kurt Vonnegut, Jr., Mark Vonnegut grew up in Cape Cod and studied religion at (Quaker) Swarthmore College in Pennsylvania. Upon his graduation in 1969, at age 21, in order to evade the draft and escape the shadow of his father, he drove to British Columbia in a Volkswagen van with his girlfriend Virginia and their dog Zeke. He briefly worked at Duthie Books. In an effort to adopt the hippie lifestyle, he retreated to a coastal commune at Powell Lake, located 18 kilometres by boat from the nearest road or electricity, where his experimentation with drugs led to a severe descent into anguish, during which time he imagined he was responsible for a California earthquake that had killed his girlfriend. He was nonetheless accorded the status of mystic on the commune that included some of his friends from Swarthmore College.

Emaciated and suicidal and delusional, Mark Vonnegut developed bizarre notions, such as a belief that he had communicated with every great artist in history. Aliens were out to get him.... On Valentine's Day, 1971, following intervention by his father, he was committed to Hollywood Psychiatric Hospital in New Westminster where he was diagnosed as being severely schizophrenic. "My son Mark's most unsociable performance when bananas, and before I could get him into a Canadian laughing academy," Kurt Vonnegut Jr. later wrote, "was to babble on and on, and then wing a cue ball through a picture window in an urban commune in Vancouver, British Columbia. It was only then that his flower children friends telephoned me to say he was in need of a father. God bless telephones.

"Mark's dear mother, Jane Marie, nÃ©e Cox, now dead, a Quaker and, like Mark, a graduate of the Quaker college Swarthmore in Pennsylvania, would often tell him that he was supposed to save the world. His college major had been religion and he had not yet considered becoming what he has indeed become, a paediatrician. One seeming possibility before he went nuts was that he study for the Unitarian ministry.

"He was then 22, and I myself was a mere spring chicken of 47, a mere 32 years ago. By the time Mark and I went in a hired car from the house with the broken picture window in Vancouver to what turned out to be an excellent private mental hospital in nearby New Westminster, he had at least become a jazz saxophonist and a painter. He babbled merrily en route and it was language, but the words were woven into vocal riffs worthy of his hero John Coltrane."

The Eden Express: A Memoir of Insanity (Praeger/Bantam, 1975) by Mark Vonnegut describes his difficulties with drugs and schizophrenia between 1969 and 1972. It was written after Vonnegut accepted his need for medication and returned to the society from whence he came. Initially Mark Vonnegut wrote an article entitled, "Why I Want to Bite R. D. Laing." Having first attributed his recovery to orthomolecular (megavitamin) therapy, he later came to the conclusion that he had been manic-depressive for hereditary reasons. Mark Vonnegut subsequently studied medicine at Harvard Medical School and became a pediatrician in Boston.

"JANUARY 1971. And then it happened. I got my wish. Just after Christmas, a year and a half after my mescaline disaster, I had a "normal" acid trip. I went up, got high, and came down Just like my fellow trippers, Virge and a couple from the Prior Road commune. Unlike the mescaline, which had woven itself too well into the fabric of my mind, the acid let me tell when it came and what it was doing and when it went. It was a pleasant, giggly day, and a huge relief to me.

"And then one night, after several days of pure Eden, as I was trying to get to sleep, marveling at the fullness of each moment, feeling that I was living whole lifetimes within each moment, I started listening to and feeling my heart beat. Suddenly I became terribly frightened that it would stop. And from out of nowhere came an incredibly wrinkled, iridescent face. Starting as a small point infinitely distant, it rushed forward, becoming infinitely huge. I could see nothing else. My heart had stopped. The moment stretched forever. I tried to make the face go away but it mocked me. I had somehow gained control over my heartbeat but I didn't know how to use it. I was holding my life in my hands and was powerless to stop it from dripping through my fingers. I tried to look the face in the eyes and realized I had left all familiar ground.

"When I first saw the face coming toward me I had thought, "Oh, goody." What I had in mind was a nice reasonable conversation. I had lots of things I wanted to talk about, lots of questions it must have answers to. God, Jesus, the Bible,, the Ching, mescaline, art, music, history, evolution, physics, mathematics. How they all fit together. Just a nice bull session, but a bull session with a difference. A bull session with someone who knew. My enthusiasm was short-lived. He, she, or whatever didn't seem much interested in the sort of conversation I had in mind. It also seemed not to like me much. But the worst of it was it didn't stop coming. It had no respect for my personal space, no inclination to maintain a conversational distance. When I could easily make out all its features, when it and I were more or less on the same scale, when I thought there was maybe a foot or two between us, it had actually been hundreds of miles away, and it kept coming and coming till I was lost somewhere in some pore in its nose and it still kept coming. I was enveloped, dwarfed. No way to get any perspective on the thiog at all, and for all I really knew it wa? still light-years away and coming and coming and coming. My own insignificance again? Shit, I sort of wanted to leam something new. "So you really want to go on a trip, do you? OK, punk, now you're really going to fly." Or words to that effect. Not words exactly, more like thunder."