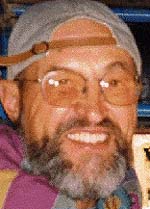 
"Writing for me is an investigative activity." -- Fred Wah, Festival of the Written Arts, Sechelt, 1988.

Frederick James Wah was appointed in December of 2012 as Canada's Parliamentary Poet Laureate. He was appointed to the Order of Canada in 2013. He was born in Swift Current, Saskatchewan on January 23, 1939 but he grew up in the West Kootenays. His racial origins are English, Scottish, Chinese and Swedish. In 1951 his family operated the newest and most modern Chinese cafe in Nelson. In his first collection of 'biofiction', Diamond Grill, he recalls growing up at his parents' West Kootenay diner, where pancakes sizzled alongside pork chow mein and chicken fried rice. He is the son of Canadian-born Chinese-Scots-Irishman raised in China and a Swedish-born Canadian mother from Swift Current. "I didn't look Chinese," he wrote. "I was pretty white. Had a lot of good friends, played hockey and trumpet... But the first girl I got serious about was from one of the town's high muckamuck families; her father was a local lumber baron. They put up with me for a little while but when things got hot she was sent away to Spokane to live with her older sister because her father didn't want his daughter marrying a Chinaman. He told me that one night when he came home late and caught us parked, necking in the alley behind their big house. He said I've got nothing against you or your family but I don't want my daughter marrying a Chinaman. It just wouldn't work. What a bastard... I can't even speak Chinese my eyes don't slant and aren't black my hair's light brown and I'm not going to work in a restaurant all my life but I'm going to go to university and I'm going to be as great a fucking white success as you asshole and my name's still going to be Wah and I'll love garlic and rice for the rest of my life...My brother did manage to marry her sister, though."

Wah's interest in music (trumpet) led him towards poetry and his development of what Stan Persky has labelled "Wah's quick-brush style". As well, his early obsessions with place led him towards Whitmanesque poetry in the early 1970s. In 1973, near the outset of his writing career, he edited Place, Anyplace: An Anthology of Photographs and Writing from the Kootenays (Castlegar: Cotinneh Books). His association with the TISH group of writers at the University of British Columbia (Daphne Marlatt, George Bowering, Frank Davey, etc.) led to studies in Alburquerque, New Mexico with Robert Creeley and Buffalo, New York with Charles Olson. He earned his Master's degree from State University in New York. In 1966, Wah's father died while Wah was a graduate student in Buffalo. In 1967 he returned to the Kootenays to teach at Selkirk College in Castlegar, B.C. from where he edited a literary publication called Scree. His ruminations about the loss of his father contributed to Breathin' My Name With a Sigh. "In writing that material I kept going into my stomach, my solar plexis," he said. Born in Medicine Hat, Wah's father had lived in China from ages five to 19. After Breathin' My Name With A Sigh was published, Wah and his wife Pauline Butling took a trip to China in 1982. He began to increasingly confront ethnicity and realized he carried anger and a huge 'Prairie weight' on his shoulders. These explorations resulted in Waiting for Saskatchewan, a collection for which he won the Governor General's Award for Poetry. After serving as the founding coordinator of a new writing program at David Thompson University Centre in Nelson (1978-1984) and teaching at Selkirk College (1985-1988), Wah did a stint as writer-in-residence at the University of Alberta in 1988-1989. This led to a teaching position at the University of Calgary in 1989, where he has remained. He has long been associated with the literary periodical Open Letter, mostly managed by Frank Davey, and the electronic publication Swift Current, of which he has served as managing editor, as well as West Coast Line from Simon Fraser University. As an editor, Wah has most significantly co-edited a collection of essays on bpNichol's Martyrology with Roy Miki for West Coast Line, called Beyond the Orchard (1997), and edited Net Work: Selected Writing of Daphne Marlatt. George Bowering edited Wah's Selected Poems: Loki Is Buried at Smoky Creek.

Having been one of the founding editors of the poetry newsletter TISH in the 1960s, Wah became a pioneer of on-line publishing in midlife, mentoring younger writers. "Of all the writers who have developed out of the TISH experience," his long-time friend George Bowering once wrote. "Wah was & is the most poetical."

For his book Permissions that was published in 2014, Wah was motivated by the fiftieth anniversary of the Vancouver Poetry Conference that was held at UBC in 1963. He describes how poets that included his friends George Bowering and Jamie Read were discovering how it was possible to write in new forms, to break established patterns with their TISH newsletter--to "disturb the words," as in jazz. Wah notes how a new importance was also given to place.

He received the Dorothy Livesay Poetry Prize in 2010 for [uncapitalized title] is a door. [See full acceptance speech below] "My writing," he said, "has been sustained, primarily, by two interests: racial hybridity and the local, the landscape of the Kootenays in southeasten BC.; its mountains, lakes, and forests. The book is a door dovetails both of these attentions and I'm pretty sure these themes, if not my particular style of writing, would also have pleased Dorothy Livesay who leaned on the local and the social for her poetry."


"In the Diamond, at the end of a long green vinyl aisle between booths of chrome, Naugahyde, and Formica, are two large swinging wooden doors, each with a round hatch of face-sized window. Those kitchen doors can be kicked with such a slap they're heard all the way up to the soda fountain."

Thus we enter the perfectly remembered Diamond Grill, in 1951 the newest and most modern Chinese cafe in Nelson, where Fred Wah serves up the story of his hyphenated identity, the sweet and the sour in tasty, mouth-watering slices. Fred Wah's father was a Canadian-born Chinese-Scots-Irishman raised in China; his mother is a Swedish-born Canadian from Swift Current. Wah senior ran the Diamond Grill, where Fred, the future writer and poet, grew up, white enough to "pass," yet marked for life by a foreign name and a taste for foong cheng and lo bok.

Diamond Grill is a rich banquet where Salisbury Steak shares a menu with chicken fried rice, bird's nest soup sets the stage for Christmas plum pudding; where racism from whites for being Chinese and from Chinese for being white simmers behind the stainless surface of the action in the cafe.

"Diamond Grill combines memories, recipes, history and narrative into a mix as savoury and heartwarming as the best bowl of hot and sour soup money can buy and love can cook. . . . Diamond Grill sparkles."
-See Magazine


I've been a BC writer for over 50 years and Talonbooks has published most of my books of poetry, starting with Pictograms from the Interior of BC in 1976. My writing has been sustained, primarily, by two interests: racial hybridity and the local, the landscape of the Kootenays in southeasten BC.; its mountains, lakes, and forests. The book is a door dovetails both of these attentions and I'm pretty sure these themes, if not my particular style of writing, would also have pleased Dorothy Livesay who leaned on the local and the social for her poetry.

I'm especially happy to be nominated for and be awarded the BC Book Prize because BC is where I have lived my life and is home to all I've imagined as possible.

Karl and Christy Siegler, Kevin and Vicky Williams, and Greg Simpson at Talonbooks have all been more than just the publishers. Their care and warm friendship continue to make publishing a valuable and pleasurable experience. Karl is the only person, besides bpNichol, who has ever provided me with any real editorial sensibility, and I will always be grateful to him for his care, generosity, and sympathetic outrage.

Pauline Butling has shared more than a Kootenay heritage with me; she has been there from the beginning of my poetry and usually offers the first word of response, and that's only one of the things I love about her.

Besides the jury of peers, I also want to thank the BCTF and the BC Book Prize Association for their support of BC writing and publishing and particularly for the Book Prize's attention to the Book Prize tour into the other parts of the province, which, for me, is the real prize, that we can share our songs, images, and stories throughout our communities, friends, and relatives who also love this place.

Finally, I'd like to congratulate particularly the other finalists, as well as many other fine writers in BC who work at words to bring imagination and hope to all of us.


Including poetry projects, a chapbook and incidental poems, is a door makes use of the poem's ability for "suddenness"; to subvert closure: the sudden question, the sudden turn, the sudden opening - writing that is generated from linguistic mindfulness, improvisation, compositional problem-solving, collaborative events, travel, investigation and documentary - in short, poetry as practice. Much of this poetry is framed by Fred Wah's acute sense of the marginalized non-urban local "place"; and coloured by his attempt to articulate senses of otherness and resistance. Fred Wah was one of the founding editors of the poetry newsletter TISH and a pioneer of on-line publishing. He is the author of seventeen books of poetry including Waiting For Saskatchewan which received the Governor General's Award in 1985. Diamond Grill, a biofiction about hybridity and growing up in a small-town Chinese-Canadian café won the Howard O'Hagan Award for Short Fiction in 1996. He lives in Vancouver.
BC Book Prizes catalogue


Fred Wah has been appointed Canada's parliamentary poet laureate. Born in Swift Current, Saskatchewan on January 23, 1939, he grew up in the West Kootenays. He is the son of a Canadian-born Chinese-Scots-Irish father raised in China and a Swedish-born Canadian mother from Swift Current. In the early 1950s, his family operated the newest and most modern Chinese cafe in Nelson, the Diamond Grill, subject of one of his more than twenty books.