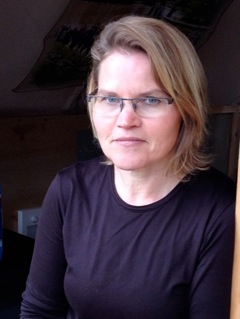 
After she gathered the information for Milk Stories: A History of the Dairy Industry in British Columbia, 1827-2000, Fort Langley-based historian K. Jane Watt was given the green light by the Dairy Industry Historical Society of British Columbia to compile the story of how settlers have struggled against flooding in the Fraser Valley since the 1870s. High Water: Living with the Fraser Floods (DIHS, 2006) is a lavish coffee table book of archival photos and oral histories that records the devastation wrought by major floods in 1894 and 1948 in particular.

Born in Germany in 1930, Barbara Boldt immigrated to Canada after World War II, married, and raised a family before embarking on her career as a painter in middle-age. Containing over 200 of Boldt's paintings as well as archival photos and sketches, her memoir/biography by Jane K. Watt, Places of Her Heart: The Art and Life of Barbara Boldt speaks of the challenges and joys of establishing a career as a woman painter in Canada.

For her own imprint, Watt has written a new kids book, The Boy Who Paints (Fenton / Sandhill $19.95), featuring the work of Fort Langley painter Richard Cole (www.colestudio.ca). It's the uplifting, coming-of-age story of a boy who persists in painting even though his mother nags him to stop. Featuring Western Canadian landscapes it's about trusting one's instincts, overcoming self-doubt. The Boy Who Paints is one of five books to be shortlisted nationally in 2014 for the Ruth and Sylvia Schwartz Children's book award, and the only book to be nominated from B.C. among ten nominees in two categories. The Ruth and Sylvia Schwartz Children's Book Awards were established in 1976 by Sylvia Schwartz in memory of her sister, Ruth, a respected Toronto bookseller. In 2004, the family renamed the awards to honour both sisters.

We don't know for certain how Surrey got its name, but there is an anecdotal story that it was named after Surrey in England, now part of the City of London, as a consequence of its location across the river from (New) Westminster. Now "our"; Surrey has taken another step towards getting the respect it deserves as B.C.'s second-largest city-destined to surpass Vancouver in population by 2041.

Completed in only fifteen months, K. Jane Watt's amazingly affordable, 295-page pictorial history, Surrey: A City of Stories (City of Surrey $25), is an expansive coffee table book, in celebration of Canada 150, about the youthful city wherein one-third of its population is under age 19. When you think of Surrey, think diversity. More than 100 languages are spoken in Surrey and it welcomes 1,000 new residents each month. 978-0-9739109-1-9

Places of Her Heart: The Art and Life of Barbara Boldt (Fenton Street, 2012)


The B.C. Historical Federation is pleased to announce the winners in the 2006 Historical Writing Competition.

The winner of the Lieutenant-Governor's Medal for historical writing goes to K. Jane Watt author of High Water: Living with the Fraser Floods published by the Dairy Historical Society of British Columbia.

The second place prize goes to Mary Ellen-Kelm who edited The Letters of Margaret Butcher: Missionary-Imperialism on the North Pacific Coast published by University of Calgary Press.

Winner of the third place prize is Kathryn Bridge author of A Passion for Mountains: the Lives of Don and Phyllis Munday published by Rocky Mountain Books.

The awards will be presented at a reception at Government House in Victoria on May 11 as part of the B.C. Historical Federation's annual conference.