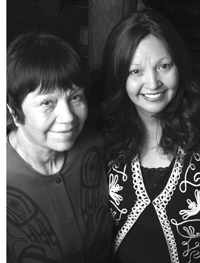 EMPLOYMENT OTHER THAN WRITING: Retired

BIOGRAPHICAL DETAILS: As the owner of Vancouver's former Liliget Feast House in the West End, that was designed by Arthur Erickson, Dolly Watts from the Git'ksan First Nations and her daughter from the Nuu-chah-nulth First Nations used their two decades of experience in the restaurant business to compile a cookbook, "Where People Feast: An Indigenous People's Cookbook" (Arsenal Pulp 2007; 3rd printing Arsenal 2014), that sheds light on the unique culinary traditions and cooking techniques of Native American people who live along the Pacific Northwest Coast of British Columbia, Canada. This collection shows how to prepare and preserve wild game, seafood, vegetables, fruits, and unusual ingredients such as oolichan, herring roe, and sopalali berries, (all of which can be purchased online from distributors if not from your local, specialty or gourmet markets). In 2004, Dolly Watts was declared a winner on an episode of the Food Network's BC Iron Chef program. Dolly was also recognized with a National Aboriginal Achievement Award for business and commerce. Accolades for the restaurant include: The New York Times gave Liliget a four-star recommendation, Where Magazine voted it Best Ethnic Cuisine, and Aboriginal Tourism BC awarded Liliget with the Excellence in Customer Service Award. 1-55152-221-7 $24.95