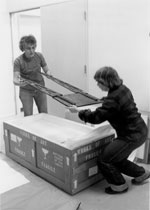 
In 1949 Gloria Cranmer was identified in the Native Voice newspaper as the "First Indian Girl to Study at UBC." She graduated in anthropology in 1956 and has since become an important linguist, filmmaker and author within the 'Namgis (formerly Nimpkish) First Nation of the Kwakwaka'wakw.

Born in Alert Bay on July 4, 1931, Gloria Cranmer Webster is a member of the influential Cranmer family that includes her brother Doug Cranmer, an artist. Their father Dan Cranmer and great-grandfather George Hunt both worked with Franz Boas who first came to Kwakwaka'wakw territory in 1886.

After the potlatch ceremonies were banned by the Canadian government in 1884, her father Dan Cranmer became famous for hosting one of the greatest potlatches in coastal history, on Village Island in December of 1921. After 17 years of preparation, the enormous gathering attracted white authorities under the direction of Indian Agent William Halliday. After 44 arrests, 22 participants were sentenced to Oakalla Prison Farm. The rest were given suspended sentences on the condition that they surrender their potlatch regalia.

Materials from Dan Cranmer's potlatch were sent to Ottawa from Village Island, Alert Bay and Cape Mudge, and some were retained by Superintendent General of Indian Affairs Duncan Campbell Scott for his private collection. Approximately half of the materials sent to Ottawa were passed along to the Royal Ontario Museum in Toronto. Chief Mungo Martin eventually hosted the first legal 20th century potlatch in British Columbia in 1953, after the ban was lifted in 1951.

Having graduated from UBC in anthropology in 1956, Gloria Cranmer worked for two years as a counsellor for female prisoners who were first-time offenders at Oakalla Prison Farm. During her work for the John Howard Society she met and married John Webster, the executive director for the society in Saskatchewan, and their daughter was born in Regina. After 18 months in Saskatchewan, the family moved to the West Coast where Gloria Cranmer Webster worked as a counsellor at the YWCA in Vancouver, raised her daughter and two sons, and became program director for the Vancouver Indian Centre.

In 1971, when Ottawa provided two-and-a-half million dollars to build the UBC Anthropology Museum, she was hired at age forty to become an assistant curator at the new facility. While collating Northwest Coast artifacts for the museum, she became deeply involved in the successful repatriation of potlatch artifacts confiscated from her father's 1921 potlatch.

In 1975, the National Museum of Man in Ottawa agreed to return potlatch materials with the caveat that a museum had to be constructed to properly display and maintain the collection. Two museums were built, one at Cape Mudge, the other at Alert Bay where Webster served as Curator of the U'mista Cultural Centre (1980-1991). Potlatch artifacts have also been retrieved from the National Museum of the American Indian.

Able to speak and write Kwak'wala, Webster played a key role in the creation of the U'mista Culture Centre, a facility modelled on a traditional Kwakwaka'wakw Big House. The Centre has since produced at least 12 Kwak'wala-language books for schools, and several award-winning documentary films including Potlatch... A Strict Law Bids Us Dance and Box of Treasures. Webster has also worked with Jay Powell to develop a spelling system to transcribe the sounds of the Kwak'wala language.

In 1991, Webster co-curated the Chiefly Feasts exhibit at the American Museum of Natural History with Aldona Jonaitis. She has received an honorary Doctor of Laws degree from the University of British Columbia in 1995, as well as awards from the Native American Art Studies Association, the British Columbia Museums Association, the Canadian Museums Association, B.C. Heritage and the UBC Alumni Association. For nine years she was a member of the Board of Trustees of the Canadian Museum of Civilization where she also served on the First Peoples' Hall Advisory Committee for eleven years. She also contributed significantly to Kwakwaka'wakw Settlement Sites, 1775-1920: A Geographical Analysis and Gazetteer (1994) by Robert Galois.

Review of the author's work by BC Studies:
K'esu': The Art and Life of Doug Cranmer