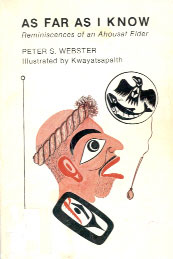 
Born at Bear River (now called Bedwell River), in Clayoquot Sound on October 3, 1908, Peter Webster overcame frustration, prejudice, alcoholism and poverty to attain a degree in linguistics from the University of Victoria while in his seventies. "I don't think I had any shoes," he once recalled. "There were no shoes, no pants. I don't know what I wore before I got to know that I was in the world."

Webster's formal education within classrooms was limited to two years at the Ahousaht School on Meares Island. "I didn't even know how to say 'yes,'" he later wrote, "and I used to get kicked or slapped or sent to bed without supper if the staff heard me use my own language." His schooling ended with an unhappy, forced marriage due to an unplanned pregnancy.

At age 20, Peter Webster remarried to his second wife Jessie, who became known as a maker of cedar hats. Once arrested for possession of the fur of seals, then arrested and sent to Oakalla prison for refusing to pay the provincial seine boat tax, Webster became known as a singer and a collector of songs and Ahousat lore, but he was plagued by alcoholism.

"The death of my oldest son, Basil Webster... marked the point when I started to live in the world again.... The step-brother of my wife, Jessie, came to me and told me plainly that because of my heavy drinking I was blind, deaf and senseless. I was not myself. This woke me up."

After Webster and his wife were featured in Ulli Steltzer's photography book Indian Artists at Work in 1976, Webster recorded his versions of Nuu-chah-nulth songs and at age 70 he dictated an autobiography, As Far As I Know: Reminiscences of an Ahousat Elder (1983), illustrated by his nephew Ron Hamilton (Kwayatsapalth). The latter third of the book contains his versions of Ahousat stories and history, including their war with the Oo-tsus-aht in the 1840s or 1850s as recalled by his grandfather. Peter Webster's Nuu-chah-nulth name O-Wo-Me-Yis means Leader on the Beach.

Webster, Peter S. As Far As I Know: Reminiscences of an Ahousat Elder (Campbell River Museum and Archives, 1983). Illustrated by Kwayatsapalth.