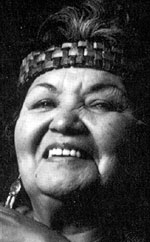 
"When your hands are both full with the knowledge of both sides, you'll grow up to be a great speaker, great organizer, great doer, and a helper of your people." -- Ellen White

In addition to Queesto, Teachings of the Tides and a reprint of Gone Indian, a novel by non-Aboriginal Robert Kroetsch, one of the first four titles from Theytus Books was Ellen White's first reader for children, Kwulasulwut: Stories from the Coast Salish (1981), illustrated by David Neel. Two of the stories in the collection are: "Father Barbeques" in which a child instructs his father how to cook; and "The Stolen Sun" in which Raven and Sea Urchin must work together to free the Sun after it has been captured by Seagull.

White's follow-up is Kwulasulwut II (1997), featuring four more English versions of Salish legends adapted for children, with colour illustrations by Okanagan band member and teacher Bill Cohen. The supernatural adventure tales are "The Mink and the Raccoon Family," "Smuy the Little Deer," "Deer, Raven and the Red Snow," and "Journey to the Moon."

Growing up on Rice (Norway) Island, Ellen White was taught Coast Salish cultural information, including hunting and fishing, by her grandparents and her parents Charles and Hilda Rice. She assisted in midwifery from age nine and began delivering children at age 16. She married Doug White and moved to Nanaimo where she raised her children in the Nanaimo Nation. As a storyteller and medicine woman of the Snuneymuxw First Nation, she has been Elder-in-Residence at Malaspina College in Nanaimo. Her Aboriginal name Kwulasulwut means "many stars."