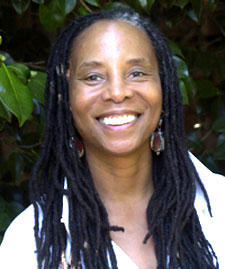 
A dual citizen of Canada and the U.S. and a resident of Salt Spring Island until September 2012, Evelyn C. White took ten years to research and write her authorized biography of Alice Walker. Previously she has published articles, essays and reviews on issues relating to women of African descent in publications that include The Vancouver Sun, Smithsonian, Essence, Ms., Wall Street Journal, San Francisco Chronicle, Philadelphia Enquirer, Seattle Times and The Washington Post. She has a special interest in the experiences of such women in rural landscapes, such as Alice Walker, the Pulitzer Prize-winning author of The Color Purple who was born the youngest of eight children in a sharecropper's family in rural Georgia in 1944.

Evelyn C. White grew up in a working class family in Gary, Indiana. After graduating from Wellesley College (1976), she worked for a theatre company in Denmark. Returning to the United States, she studied theatre at the University of Washington and began writing professionally while living in Seattle. She graduated from Columbia University Graduate School of Journalism (1985) where she received the Christopher Trump Award for her Master's thesis on "The Racial Development of Blind Black Children." She earned a Master's degree in public administration from Harvard University (1991) and edited The Black Women's Health Book: Speaking For Ourselves (Seal Press, 1994).

As a former legal advocate for the Battered Women's Program in the Seattle City Attorney's office, she has continued to study intimate partner violence as the author of Chain Chain Change: For Black Women in Abusive Relationships. She came to Canada in 2002, residing on the West Coast until relocating to Halifax in September of 2012.


The ascendancy of Alice Walker from sharecropper's daughter to literary star is traced by Evelyn C. White in Alice Walker: A Life (W.W. Norton / Penguin $44). Ms Magazine founder Gloria Steinem, plus Color Purple cohorts Quincy Jones and Oprah Winfrey make appearances, but this is not a tell-all bio for the paperback newsstands. White defends Walker against all her critics in her celebration of the struggle of the first black woman to receive the Pulitzer Prize for fiction, for The Color Purple, made into a movie by Steven Spielberg. Sexual politics, racial friction and misplaced violence have percolated through Alice Walker's work and life, ever since her fiction and poetry emerged from the civil rights movement of the 1960s, and White does an admirable job tracing the foundations of Walker's fiction. For a female black to hold firm to her resolve to place art above the dictates of political correctness or family has taken courage. The egoism of the artist, who must pursue her calling at all costs, is a theme that will doubtless be examined more deeply in future biographies. Although Evelyn White is an unmitigated supporter of her subject, her work will serve as the basis for Alice Walker scholarship for many years to come. 0-393-05891-3