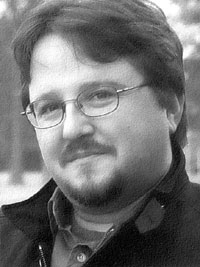 
Having established his reputation as a prolific book reviewer and event coordinator for Bolen Books in Victoria, bookseller Robert Wiersema published his first novel, Before I Wake (Random House), about the strange aftermath of a tragic traffic accident. After three-year-old Sherry Barrett is left comatose by a hit-and-run truck driver, Henry Denton, her parents Simon and Karen struggle to maintain their marriage, barely able to cope with their grief as they care for their helpless daughter, suspended between life and death. The truck driver, who attempts suicide, is immobilized by his all-consuming guilt. Then sick and dying "pilgrims" begin to visit Sherry's bedside, believing her unworldly presence has the power to mysteriously provide healing.

They say the worst thing is to lose a child. In Wiersema's riveting domestic drama, Bedtime Story (Random House), two estranged parents must cope with their son's supernatural descent into the thralls of a fantasy novel. The structure is reminiscent of Princess Bride, the movie, in which a bedtime story leads to menacing predicaments, only this time the worst dangers are medical, in a real-life drama.

After B.C. novelist Kevin Chong wrote his book about the music of Neil Young, Wiersema has delved into non-fiction for his penetrating veneration of The Boss with Walk Like A Man: Coming of Age with the Music of Bruce Springsteen (Greystone). Part memoir, it doubles as a tribute to his wife, Cori, and others who have shared his deep appreciation for the singer-songwriter along the way.

Articles: 1 Article for this author
Before I Wake
Review


Having established his reputation as a prolific book reviewer and event coordinator for Bolen Books in Victoria, Robert Wiersema has now published, Before I Wake (Random House $32.95), a first novel about the hellish and bizarre aftermath of a hit-and-run accident.

The impetus for Before I Wake was a Vancouver Sun article that Wiersema read about a religious family caring for their little girl reduced to a catatonic state. "They began noticing strange things happening around their daughter,"; he says, "like weeping madonnas and bleeding crucifixes.

"Word began to get around that perhaps their little girl was miraculous. So this family began taking reservations from believers around the world, and once a week they would take her out to the backyard, under a tent, and allow these pilgrims access.";

In the novel, Simon and Karen Barrett struggle to maintain their marriage, barely able to cope with their grief, after their three-year-old daughter Sherry has become comatose, struck by a hit-and-run driver. Simon initially behaves contemptibly, abandoning his wife and daughter in the hospital within hours of the accident in order to seek comfort with his mistress.

"It's essential that, early on, readers hate Simon,"; Wiersema says. "And they do. The terms that I've had female readers use to describe him are often obscene, and certainly passionate.";

Karen has previously sacrificed herself, working during the couple's first few married years to help put Simon through law school, waiting patiently to have her beloved child. She becomes madonna-like in her devotion and forgiveness. When her husband leaves home to live with his lover, Karen is doubly devastated, but Mary, the beautiful and younger "other"; woman, who works for Simon, is relatively unconcerned about the consequences of her affair.

Henry Denton, the hit-and-run driver, cannot escape the image of Sherry flying up in front of his truck; so he tries to blot out this recurring image by attempting suicide. But his hoped-for death is arrested by an unseen hand. He must remain in a living Purgatory until he, too, finds a way to resurrect himself.

Sherry should have died when taken off life support, but instead she inhabits an eerie limbo. Henry's words immediately following the accident were prophetic. "I didn't kill that little girl,"; he said. "She just floated away."; Believing Sherry has gained the power to heal while suspended in her unconscious state, sick and dying "pilgrims"; begin to visit Sherry's bedside.

Ruth, a home care nurse assisting Karen, is the first to be healed by Sherry. One day she suddenly realizes that her crippling arthritis has disappeared. She instigates the parade of the sick and the dying to the home. Should Karen allow these poor souls access to her daughter? The domestic situation is complicated by the twisted plans of a misguided soul, a false priest who attempts to discredit Sherry's miracles and, when that fails, to destroy the family.
Writing this novel, Wiersema was amazed by the way his characters shaped the plot. "The key to the book was that it was unplanned, that I had no idea, from day to day, where it was going,"; he says. "I was surprised, for example, when Simon left the hospital to collapse at Mary's. Similarly, I was surprised when Henry tried to kill himself, and when he couldn't.";

Many readers may be concerned that the book is too depressing, but miracles can mitigate sorrow, and, according to Wiersema, Before I Wake is mainly about forgiveness and redemption. He hopes Simon's journey back to the family, and to a new level of understanding of himself, will keep the reader hooked as Wiersema orchestrates his tale with the shifting points of view of the main characters, placing the reader outside the family, almost-you could say-looking down at them and their lives. It's ultimately an optimistic view from up here, if you don't feel dizzy zooming in and out of so many people's heads. Magic, miracles and mirages aren't for everyone. 0-679-31373-7

--article by Cherie Thiessen, a freelance writer on Pender Island.