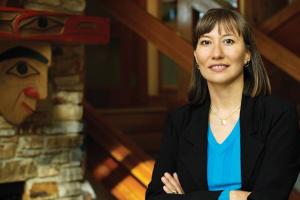 
Born on Haida Gwaii, Gid7ahl-Gudsllaay Lalaxaaygans Terri-Lynn Williams-Davidson is a Haida artist, performer and activist whose illustrated book Out of Concealment: Female Supernatural Beings of Haida Gwaii (Heritage 2017) contains Haida Nation origin stories that she says were passed down through oral traditions. These stories about Haida values and customs, regarding both earthly and metaphysical realms, are accompanied by more than 30 colour photo collages, often featuring Williams-Davidson depicting the Haida mythological beings. Williams-Davidson transforms herself into iconic Haida figures such as Sguuluu Jaad (Foam Woman), Ts’uu K’waayga (Cedar Sister), Xuuajii Jaad (Grizzly Bear Woman), and dozens of others as they appear in their natural setting in the Haida Supernatural Realm. The goal is to encourage readers to see the feminine and the powerful in land and seascapes. Out of Concealment is also designed to serve as a call to respect the environment.

The book was released in conjunction with the opening of an exhibition of Williams-Davidson's work at the Haida Gwaii Museum from June to December in 2017. The book forms part of a multi-media installation that includes live performances of contemporary Haida songs; and an exhibition of photomontages. “I like the idea of blending modern media and ancient traditions to address contemporary challenges," she says, "in a way that appeals to people of all ages." The book includes forewords by anthropologist Wade Davis and Haida Elder GwaaGanad, Diane Brown.

Williams-Davidson has promoted Haida music and culture since the age of thirteen. In 2000, she founded the Haida Gwaii Singers Society with other veteran Haida singers including her husband, artist Robert Davidson. She has received multiple awards for her music, including several Canadian Aboriginal Music Awards, an Aboriginal People's Choice Award, Canadian Folk Music Awards, a Western Canadian Music Award, and Native American Music Awards. At the Canadian Aboriginal Music Awards she was named Best Female Artist for her 2011 album, New Journeys. Her CD called Grizzly Town was launched at a Vancouver book launch for Out of Concealment at The Cultch (Vancouver East Cultural Centre) on August 27, 2017.

Since 1995, Williams-Davidson has represented the Haida Nation at all levels of court, including the Supreme Court of Canada. In 2014, she received the West Coast Environmental Law People's Choice Andrew Thompson Award for environmental advocacy.