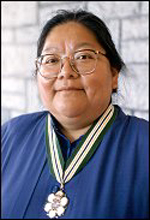 
Born in Mount Currie within the St'at'imx (Lillooet) First Nation, Lorna Williams trained at the B.C. Institute of Technology to become a nurse, but switched to education to specialize in First Nations instruction.

In 1973, she became involved in the administration of the Mount Currie Community School, developing training for First Nations teachers to teach in their own language. Williams subsequently worked as the Native Indian Education Specialist with the Vancouver School Board and became involved in constitutional issues, both federally and in Europe, to ensure the representation of indigenous peoples.

Williams has served as director of the Cultural Centre and Curriculum Development for the Ts'zil Board of Education and she has created Lil'wat Language Curriculum Materials such as Exploring Mount Currie (1982), adopted as a Grade Two text. Illustrated by Plains Cree artist Mary Longman, Williams' second book Sima7 Come Join Me [sic] (1991) describes the activities of a four-day youth gathering held on the banks of the Lillooet River. Lorna Williams received the Order of British Columbia in 1993.