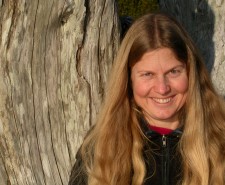 Jacqueline Windh gets around. In 2015, at age 51, she participated in a seven-day ultra-marathon in the Kalahari Desert. Previously she visited Navarino Island, the final stop north of Cape Horn, during her visits to southernmost Patagonia to help record the traditional stories of the Yagan people, the most endangered indigenous people in the world, as well as the southernmost.

"The people that I worked with there are the Yagan (or YÃ¡mana) canoeing people," she has recalled, "whose territory is the margins of the Beagle Channel and Cape Horn. They have a lot of cultural similarities to the coastal people here (Nuu-chah-nulth), which is what I am interested in following up on." In southernmost Chile, Windh collaborated with Cristina ZÃ¡rraga, granddaughter of Cristina CalderÃ³n, the last remaining pure-blooded Yagan person alive who is also the only remaining speaker of the Yagan language.

For uncounted centuries the Yagan-or YÃ¡mana-were nomadic fishers and hunters who traveled as families in the cold and turbulent waters south of Tierra del Fuego (Chile and Argentina), often carrying their fire with them in their canoes, smouldering upon a bed of mud and sand.

Cristina CalderÃ³n and her late sister Ursula CalderÃ³n recounted traditional Yagan stories, in their native tongue. These Yagan stories were then compiled by the CalderÃ³ns' Spanish-speaking granddaughter Cristina ZÃ¡rraga and translated into English by Jacqueline Windh. The end result is a bilingual book, published in Chile, Hai kur mamashu chis: I Want to Tell You a Story (CreateSpace $18), a folklore collection illustrated with woodcuts by Chilean artist Jimena Saiter.

Earlier Windh also contributed to First Nations of the Pacific Northwest: Change and Tradition (WestfÃ´lisches Museum fÃ¼r Naturkunde, MÃ¼nster, Germany, 2005), a hardcover edition with approximately 200 colour and archival photographs. It became available in Canada in 2009. This book was spearheaded by the museum's director Dr. Alfred Hendricks; Windh was a contributor, and she took on the task of importing and distributing it herself in Canada. For more info about the book, visit the page: http://jacquelinewindh.com/books/pacific-first-nations/

"My main contribution to this book," she writes, "is a series of 16 interviews with residential school survivors. I have a long-standing and very trust-based working relationship with the local Nuu-chah-nulth communities here, and because of that I was able to do interviews that dig to a much deeper level than most writers or journalists would have been able to obtain... I don't think anything like this has been published in Canada."

Windh is a Port Alberni-based geologist, photojournalist and ultra-marathoner who ran the Kalahari Augrabies Extreme Marathon, along with her husband, in 2015. It's an approximately 250-kilometre race through part of the Kalahari Desert in southern Africa. "The water in my water bottle was hotter than the temperature we keep our hot tub at home. That's what we were drinking," Windh told CBC's North by Northwest host Sheryl MacKay. The race takes place in six legs over the course of seven days. Racers frequently stopped to give one another aid. "I felt like I was walking cross-eyed," she said.

Windh has increasingly combined running and writing as a regular contributor to the world's largest adventure racing website SleepMonsters.com, and also as the managing editor of the digital magazine RunningUltramarathons.com

Articles: 1 Article for this author
Celebrating the Yagan
Press Release 2013


Author and translator Jacqueline Windh will be touring across North America from September through December in 2013 to launch her new book Hai kur mamashu chis: I want to tell you a story.