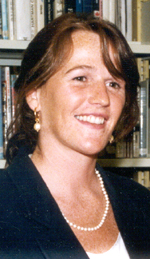 
Barbara Woodley's notorious 'bare shoulders' photograph of Kim Campbell is one of 66 portraits featured in the photographer's coffee table book, Portraits: Canadian Women in Focus (Doubleday, 1992), the second book to receive the VanCity Book Award for best book pertaining to women's issues by a British Columbian.

To compile Portraits: Canadian Women in Focus, Barbara Woodley drove across Canada in a van, sleeping in the vehicle and renting dark rooms along the way. All 66 of her subjects kept their appointments; all responded to her written requests for statements about their beliefs. When the late Jean SauvÃ© asked her, "Who's you publisher?" Woodley had to confess to the former Governor-General she didn't have one. Woodley was finally able to send SauvÃ© a copy of the book in February. The next day she read in the paper that Jean SauvÃ© had died. "I was really worried she had never seen it," Woodley says. Two days after Jean SauvÃ©'s funeral, a letter arrived from Jean SauvÃ©. She thanked Woodley for taking the photo and was happy to know the photo would remain long after she was gone.

"I wanted to photograph Kim Campbell with her cello," says Woodley. "She explained to me that several pictures of her with her cello had already been taken. Nevertheless, to oblige me, she went downstairs to get ready to do the cello photo. She had wanted to wear her Minister of Justice robe, which at that time-in 1990-she had just received. She had brought the robe with her. It was on a hanger with the cellophane from the dry cleaners. I had explained to her that I couldn't take that photo because I'd already taken a picture of Supreme Court Justice Beverley McLachlin wearing her robe. As I was setting up, I saw the robe on the hanger with the plastic around it. I thought perhaps she could hold the robe in font of her.

"The bare shoulders was entirely my idea. She agreed to it because she has some artistic sense. She knew having a blue blazer and pearls and a scarf behind a black robe wouldn't work. It would take away the simplicity and strength of the robe. We both wanted to create a strong simple portrait emphasizing the robe in front and the woman behind it. Getting the robe into the picture was what was most important to her all along. That's exactly how the photo came about. Kim Campbell never even saw the photo until it was exhibited publicly in Vancouver in 1990. She came to the opening and liked it. The insinuation in the media that the photo was somehow a political move is ludicrous.

"It really all started when Mark Schneider did a story from Ottawa for BCTV. He plucked that one photo out of the exhibition. There was no explanation or credit given. He said on camera, 'What do you think of this picture?' They did a poll on BCTV asking people if they thought the picture of Kim Campbell was appropriate. They compared her to Madonna and her Sex book. That's when it started to get in all the newspapers. I thought to myself, 'These people are visually illiterate if they're comparing the Kim Campbell photo to Madonna.' The Ottawa Citizen did a story and the photo was included in their wire story. Pretty soon the photograph was printed in the British tabloids. I don't know how they got a hold of it. I did receive an offer from a Holland newspaper to pay me once but then they got wind that they could pick it up for free through the Associated Press.

"I discovered from reading Photography and the Law (Self-Counsel) by Christopher DuVernet that once a photograph becomes a story in itself, use of the photo is known as 'fair play'. I consulted a lawyer who said there was nothing I could do. Pretty soon people started making t-shirts of the image, selling them. Still there was no reference to where the photo came from. Later on Allan Fotheringham's entire article in Maclean's implied that this photo was a political maneuvre on Kim Campbell's part. When I read that I thought, 'You're dead wrong, Allan Fotheringham. But people are going to believe you.' Now every time I see Jean Charest holding up a clothes hanger I wonder how many connotations there can be to that one photograph. Finally Canadian Press phoned me to see if they could use the picture when Brian Mulroney stepped down. I told CP they could use the photo if they gave credit. It was used and no credit was given. So I phoned them and asked if it wouldn't be too much trouble if people contact me first before they used the photo. After all, they were hardly using the photograph to talk about inspiration and Canadian women; it was just completely out of context.

"I was flooded with phone calls from the media, people wondering why I was angry. I said, 'Listen, I don't want to make this into a story.' Then the media told me that if I didn't talk to them, people would assume Kim Campbell was having me pull the photo from her. That was really unfair and ridiculous. I wasn't pulling the photo at all. I was simply asking people to phone me first as a courtesy before they used it. I don't know how all this is supposed to work out because I'm so inexperienced at this sort of thing. But if other people are making money from your work... well, it makes you wonder. To this day I haven't received one cent for that photo. I don't mind so much not making money myself. I was never in it for the money. But there's another issue that does bother me. For me, the primary point of my book has always been those Canadian women and how they're inspiring people. The origins of that Kim Campbell photograph, in terms of its context and its meaning, have been almost entirely overlooked. I think it's really too bad that the media takes things out of context. People will become scared that things will be taken out of context and they'll stop trusting people."

Barbara Woodley was living on Bowen Island when she received the Vancity Book Prize in 1993.