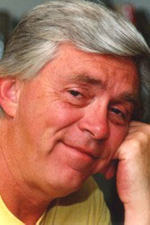 
Creator and manager of Sono Nis Press from 1966 to 1976, J. Michael Yates died in Vancouver General Hospital on April 17, 2019 from a variety of ailments. He was one of the most influential literary figures in British Columbia during the 1970s.

J. Michael Yates was born in Fulton, Missouri on April 10, 1938. (In Skookum Wawa, edited by Gary Geddes, Yates' biographical entry states he was born in 1938 on Victoria Island in the Northwest Territories.) After studies at the Universities of Missouri and Michigan, he received his Ph.D. in Comparative Literature from the University of Michigan at Ann Arbor.

Having taught in Ohio and Alaska, Yates arrived in Canada in July of 1966 and remained on the staff of the Creative Writing Department at UBC from 1966 to 1971, meeting Charles Lillard there in the fall of 1967. He participated in the founding of Contemporary Literature in Translation with Andreas Schroeder in 1968 and co-edited Volvox: Poetry from the Unofficial Languages of Canada (with Charles Lillard) in 1971. Partly influenced by Lillard, who was born in Alaska, Yates became one of the first of numerous urban writers to try living on the Queen Charlotte Islands, moving there in 1971 while operating his Sono Nis Press.

The name Sono Nis was derived from the name of a character in the first book that the press published, J. Michael Yates' own Man in the Glass Octopus. [Sono in modern Italian means "I am"; Nis in Anglo-Saxon means "are not"] When bills were unpaid, Richard Morriss of Morriss Printing gained ownership of Sono Nis in 1976 and moved its headquarters to Victoria.

After living on the Queen Charlotte Islands for the three years, the locale gave rise to one of his books of poetry, Insel, in 1983. Yates was later involved in the founding of Burnaby-based Cacanadadada Press, both naming it and acting as its editorial director, but he was not its owner. [Founded my Margaret Fridel in 1988, Cacanadadada was later sold to UBC English professor Ronald Hatch who changed its name to Ronsdale Press, an amalgam of his first name and his wife Veronica's maiden name, Lonsdale.]

In 2007 Yates resurfaced as Senior Editor of Libros Libertad, owned by Manolis Aligizakis of White Rock. Publicity material stated Yates and Aligizakis "formed an international team to reinvent book publishing and promotion." During its first year of operation, the press released a collection of poetry by the company's owner, El Greco - Domenikos Theotokopolous (Libros Libertad $14.95), with an endorsement from Yates on the jacket, "I think Manolis Aligizakis is the best immigrant Greek writer in Canada and I welcome his return to publishing."

Yates was once called one of Canada's most determinedly experimental writers. His many books of often impenetrable poetry include Nothing Speaks for the Blue Moraines and Breath of the Snow Leopard. Earlier prose works such as man in the glass octopus and the abstract beast were followed by two collections, Torque and Torpor: Collected Fiction, 1960-1987, Volume 2.

An SFU Ph.D candidate in Criminology, Yates began working as a Canadian prison guard in the 1980s, resulting in a book about prisons, Line Screw: Memoir of a Prison Guard (McClelland & Stewart, 1994), with editor Douglas Gibson.

A Canadian citizen since 1972, Yates once said he spent a portion of almost every year collecting imagery "in the bush" of British Columbia, the Northwest Territories, Alaska, and the Canadian high arctic, Iceland, Finland, Russia, Norway, Sweden and China. After ten years "in the bush living in the Coast Mountain Corridor" (Squamish), he returned to live in Vancouver.


"An image is one of an infinite number of entrances to an arena where something ineffable has always been going on."; Or so says J. Michael Yates. In the sixties he was a black-leather-jacketed-motorcyclist-poet who taught Creative Writing. Since then he's constructed different personas and careers but J. Michael Yates has kept on writing. This volume is a representative sampling of new and collected work of an original presence on the West Coast writing scene; and it proves his poetry is standing the test of time. "Something is rising in the black throat of the sky. Something draws me into the earth by my eyes. Just beneath them the avalanches of flesh begin. The language of a man alone in the bush goes the colours of boulder-fields and lichen."; Distinctly the poetry of contemplative fishing in northern places (Alaska, Queen Charlottes), Hongyun includes the stunning Great Bear Lake Meditations which remain as fresh now as they were groundbreaking four decades ago. Also included, his Book of Interrogations is both rambling and erudite, a series of aphorisms on the art of writing. Sometimes prophetic, sometimes irascible, this Ecclesiastes of Poetics is an evocative summing up by a mature poet who hasn't compromised his aesthetic, though it metamorphosed constantly. Yates, a former publisher and prison guard, has earned his place in the pantheon of influential B.C. poets and this is a welcome collection. "Time and tide, exhaling here, now, after the long breathing-in of being young. Here on the subsiding side of both time and tide, among the clear pools full of things waiting for water to return, the steel-coloured sea-blade carving far out and almost out of sight, falling and falling and almost at low-slack. Time now to say inside it is almost good to know for a certainty with the blood: I can die."; 1-4208-2770-7


Faced with the task of painting Aunt Polly's fence in Mark Twain's The Adventures of Tom Sawyer, Tom convinces his friends to do the job for him. Recalling Mark Twain's own childhood in a small Missouri town, Tom's shenanigans are set in St. Petersburg, Missouri. Also born in Missouri, J. Michael Yates came to British Columbia in 1966 and has succeded in getting folks to be involved in publishing.

Founded in 1968, Sono Nis Press was largely the brainchild of Yates, who provided the unusual name and much of the editorial direction, until Morriss Printing of Victoria took over ownership when bills couldn't be paid. Now a venerable imprint, Sono Nis Press is operated from Winlaw, B.C. by Diane Morriss.

Next, Yates was involved in Margaret Fridel's Burnaby-based Cacanadadada Press, naming it and acting as its editorial director. When this experiment fizzled, its owner sold the company to UBC English professor Ronald Hatch who changed its name to Ronsdale Press.

By 2005, Yates was getting his own stuff into print, releasing Hongyun: New and Collected Shorter Poems 1955-2005 (Author House, 2005).
Last year Yates resurfaced as Senior Editor of Libros Libertad, owned by Manolis Aligizakis of White Rock. Press material described Yates as "a much commended SWAT-team member,"; "a logger and a demolitions man in the Charlottes"; and "a broadcast executive both for CBC and private media in the United States."; It wasn't mentioned that he had long been employed as a prison guard or his prison memoir, Line Screw, which resulted in severely strained relations with its publisher, M&S.

The Saskatoon Star-Phoenix once compared Yates' plays to those of Beckett, Pinter and Albee.

Concurrently, Yates provided the jacket blurb for El Greco-Domenikos Theotokopoulos (Libros $14.95), a collection of poetry by his new publisher-"I think Manolis Aligizakis is the best émigré Greek writer in Canada and I welcome his return to publishing.";

This year, after publicity materials stated Yates was part of "an international team to reinvent book publishing and promotion,"; the pair has literally parted company. A former Vancouver stock broker, Aligizakis says he's now quite happy to be free of Yates-who he still admires as a writer.